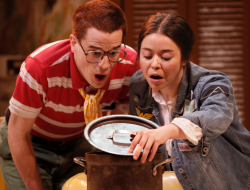 Beloved queer band The B-52’s are getting ready to embark on their 4oth anniversary tour in a few weeks which will take them around the world, including stops in Portland Oregon and Seattle Washington in August.

The band who originated in Athens Georgia in 1976 with a very unique retro pop/rock sound that came to be known as “New Wave” consisted of Fred Schneider on vocals; Kate Pierson on vocals and keyboards; Cindy Wilson on vocals and percussion; her brother Ricky Wilson  on lead guitar and Keith Strickland on drums, guitar and keyboards. All three men in the group are/were gay and Ricky Wilson died from AIDS in 1985 which devastated the close band members who took a break after his death. It was at this point Keith Strickland took over the lead guitar spot in the band and the band hired outside drummers for studio work and tours.

The band scored a number of hits in the 80s including “Rock Lobster” and “My Own Private Idaho” but it was 1989’s “Love Shack” that became their biggest hit. The band took a break for several years in the 90s and early 00s before hitting the road again on numerous nostalgia tours with other popular 80s groups like The Go-Gos. Strickland retired from the band in 2012 and the trio of Schneider, Pierson and Cindy Wilson keep the B-52’s spirit alive today.

The group will hit the road starting in May with support from fellow popular bands from the era, Orchestral Manoeuvres in the Dark (OMD) and Berlin.

This is also being called a “Farewell Tour” but since Cher started polluting that term over a decade ago with 32 different “farewells” it doesn’t mean much. (also to be fair, Frank Sinatra did the same thing “back in the day” having farewell tours that went on for years and years…)

Tickets for Portland and Seattle shows go on sale this Friday. For Seattle, go here to snag them!