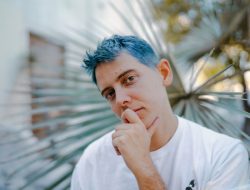 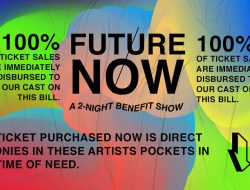 A Song For Trans Day of Visibility: “Samantha”

Canvasback Records/Atlantic Records is proud to announce the release of “I Am Samantha” from singer-songwriter Benjamin Scheuer. The touching track recounts the real-life journey of Samantha Williams – a transgender woman who Scheuer first met and befriended at a coffeeshop in New York City.

As Scheuer learned about Samantha’s story – and she in turn learned about his career as a singer/songwriter – she reflected on the fact she’d never heard a song about someone named Samantha. He promised her to change that, filling notebooks with details of her life and her journey to transition, and ultimately writing what is now “I Am Samantha.” Included below is a note from Samantha which beautifully illustrates the origins of the song from her perspective.

“I Am Samantha” is the story of one trans woman. It is also the story of what it means to love and be loved. With uncommon empathy, Scheuer unpacks not just Samantha’s journey, but the human journey we all take to find identity, acceptance, and love.

Today’s release comes accompanied by a powerful music video directed by T Cooper [director of the award-winning documentary Man Made] and starring a cast of 27 trans actors (believed to be the largest trans cast assembled to date). The visual was also helmed by an all-female, LGBTQ, and/or person of color crew. Notable cast members include Monica Helms (creator of the Transgender Pride Flag) and Skyler Jay (Season 2 of Queer Eye).

The official video comes joined by a touching behind-the-scenes “making of”documentary directed by Allison Glock-Cooper, herself an acclaimed author + director.

WATCH “I AM SAMANTHA” + BEHIND THE SCENES DOC: HERE

The song is being released today, March 31st on International Transgender Day of Visibility in partnership with a host of incredible organizations including the Transgender Legal Defense & Education Fund (TLDEF), GLAAD, Trans Lifeline and The Ally Coalition.

Of their partnership on the project, TLDEF Program Manager AC Dumlao shares: “‘I Am Samantha’ is more than a song and a music video, it is a message that trans communities are resilient and multifaceted, and our stories are meant to be seen and heard. At TLDEF’s Name Change Project, where we connect low-income trans folks with legal representation in the name change process, we work with hundreds of trans folks every year, who like Samantha, are looking to live in their truth with their chosen name. TLDEF is excited to collaborate with Canvasback Music for the release of ‘I Am Samantha.’”

Benjamin Scheuer’s journey to this debut is not your standard singer/songwriter story. Well known throughout the theatre world on both sides of the Atlantic for his one-man show THE LION (2014), (which delivered a clutch of awards including a Drama Desk Award for “Outstanding Solo Performance,” an off-West End Award for “Best New Musical,” and an ASCAP “Cole Porter Award for Songwriting”), Scheuer is also a published children’s author (with his wife Jemima Williams) for Simon & Schuster, having written Hibernate With Me and Hundred Feet Tall; and the author of Between Two Spaces, which documented his diagnosis with – and successful treatment for – stage IV Hodgkins Lymphoma.

He’s a customer at the West Village coffee shop where I work, a fellow artist (I’m a writer; he’s a musician) who attended a reading of one of my screenplays and gave truly helpful notes, a tall guy with a boyish face and steampunk style, with cherry-dyed hair, elaborate boots and epaulets, and yet announcing his presence most resoundingly with his seemingly ever-present smile and earnest, enthusiastic greetings. Benjamin Scheuer (pronounced SHOY-er) is a storyteller with a guitar, sharing through song his own very personal trials and triumphs as well as those of others. I already knew this when in his presence I complained to a coworker, as we listened to the Foo Fighters song “Sean” (also my fellow barista’s name), that there were no popular songs about “Samantha,” the name I had taken as my own about a year before (though I’m still not sure this oversight of songwriters throughout contemporary music history is actually true).

“I Am Samantha” was conceived in that moment of everyday food-service-industry banter, both songwriter and subject knowing this wouldn’t be just another lighthearted serenade or would-be rock hit in which the name was chosen simply because it rhymed with something or had the right number of syllables. This was highlighted for Benjamin when I told him the origin of “Samantha,” that it had been the only name my parents could agree on prior to my birth, not yet knowing what was between my legs—which would ultimately lead to a name I went by for decades before all but erasing it from identifying documents (Ohio being one of four states that don’t allow changes to one’s birth certificate).

Benjamin and those involved in every aspect of the recording, producing and upcoming release of “I Am Samantha” have each endeavored to understand and do right by the story of my transition from [dead name] to the fully realized, confident person I am today. Each of them I’ve had the pleasure of meeting is just as evidently excited as I am to share this song, this story of struggle and self-discovery, with the world—so that it might do what art uniquely can, which is to increase empathy by revealing the world through someone else’s eyes, while also, I can attest, making some of us feel just a little less lonely.

Tags: "I Am Samantha", Benjamin Scheuer, Trans Day of Visibility