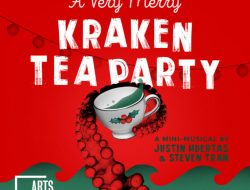 ArtsWest To Debut A New (And VERY Gay) Holiday...

Oh, honey children…we’ve been waiting FOUR LONG YEARS to post this song and video to express our motherlovin’ joy that Donald Trump and his Illegitimate Regime have been defeated, crushed and sent packing from Washington D.C.

Finally, today, Saturday, November 7, 2020 Joe Biden and Kamala Harris have been declared the winners of the 2020 Presidential/Vice Presidential election defeating Donald Trump and Mike Pence. Currently, the Electoral Vote gives Biden 290 votes to Trump’s 214 (with a couple more states still to be decided) which gives Biden 20 votes over the 270 needed to become the 46th President of the United States.

In the immortal words of Luther Vandross who wrote both music & lyrics for this song featured in the Broadway musical The Wiz, it truly is a Brand New Day.

Everybody’s glad
Because our silent fear and dread is gone
Freedom, you see, has got our hearts singing so joyfully
Just look about
You owe it to yourself to check it out