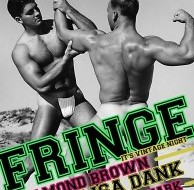 January 18, 2012 Comments Off on Saturday night seems a bit naughty boots…FRINGE at The Eagle and Mr. Buff and Friends at Pony. Views: 1583 Nightlife, We Love The Nightlife

Saturday night seems a bit naughty boots…FRINGE at The Eagle and Mr. Buff and Friends at Pony. Tony Buff wants to lure you into his web of lust...at Pony this Saturday.

There seems to be a bit of trend concerning events happening this Saturday, January 21…We’ve noticed there are a couple zexy events happening on Capitol Hill and both probably featuring sweaty, under dressed men (and probably some women,too) doing unspeakable things. Let’s speak of them, right now!

It’s January, it’s cold, it’s wet, we’re still hungover from the holidaze and nothing sounds better than making love to a space heater and watching 90s reruns 24 hours a day… well it’s an intervention you lazy fools! So get in loser, we’re going partying.

On the way out the door be sure to raid grandmas closet for this month’s FRINGE, because honey it’s VINTAGE. That means really old dead FUR (FUR FUR FUR), floral dresses, SILVER, some good NAVY coats and garb, MOD, BOHO, COOL, LAME, everything created before the invention of the CAPS LOCK button, bust it out, dust it off, layer it up and wrap it around.

I think he’s a paid shill for Red Light…January is a slow month for them. But, I’m sure many glitterbombs and disco muscle Marys will be on hand to do unspeakable things in The Eagle’s cage of perversion.

If you are in Seattle on Saturday Jan 21st, you can meet Buff and several of the hottest fetish performers in the industry at Pony (1221 East Madison Street, Seattle WA) during the Pony Up! wrap party. Leo Forte, Doc Benway, Preston Steel, Draven Torres and Chris Yosef will all be on hand, so you know it will be a nasty, good time. The party will be kickin’ by ten and will rock ’till closin’.