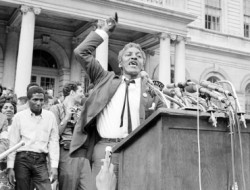 Irony: 10 Years Ago Today, The Supremes Gave Us The Right To Fuck John Lawrence and Tyson Garner, the plaintiffs in Lawrence v. Texas the Supreme Court decision which ended sodomy laws in the US. Photo: David J. Phillips

I haven’t seen anyone mention this, but today’s decision by the Supreme Court of the United States to overthrow the Defense of Marriage Act (DOMA) and defer to a lower court on California’s Proposition 8 banning same sex marriage in that state, comes EXACTLY 10 years to the day after the Supreme Court ruled on Lawrence v. Texas, the landmark decision that invalidated sodomy laws in Texas and 13 other states and thereby making same-sex sexual activity legal in the United States. In other words, we’ve come a long way in a decade, from being denied basic human sexual rights, to the point where actual marriage between two people of the same sex is acknowledged.

For those of you who don’t remember, the Lawrence in Lawrence v. Texas was John Lawrence, a 55 year old gay man from Houston Texas who was arrested and charged with “deviate sex” after police entered Lawrence’s apartment and found Mr. Lawrence having sex with Tyson Garner, a 31 year old African-American gay man. Lawrence challenged the police on the illegal entry and questioned whether the charges were motivated by both homosexual bias and the fact that Lawrence was a white man having sex with a black man. Lambda Legal stepped in to represent the men in their court appearances and thus began a judicial journey through the Texas and U.S. Court systems which ultimately led to the final SCOTUS decision to rule in favor of Mr. Lawrence and overturn the sodomy laws nationwide, which was issued on June 26, 2003.

This was a huge victory for all Americans, but particularly for all gay and lesbian citizens. For decades, the basic act of having consensual sex was illegal and thousands of gay men and women were persecuted, prosecuted, imprisoned and denied the most basic of human rights…the right to FUCK. The shame of being caught or prosecuted for acts of “sodomy” led to the suicides of many people. The end to sodomy laws signaled the beginning of the road to true equality for all lgbtq people. Earning the right to legally marry is just the next step in that progression.

But, do not forget the advances earned by Lambda Legal and Mr. Lawrence and Mr. Garner’s fight to win us the right to basic human acts and the privacy to perform such acts.

They were pioneers. Honor them.