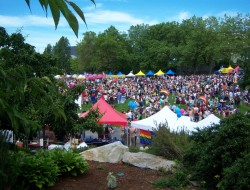 After a weekend of fun and parties, it’s time to…have a parade.

Seattle Out & Proud’s Pride Parade begins marching down 4th Avenue in Downtown Seattle at 11am Sunday morning, June 30, starting at Union Street and progressing all the way down to Denny Way and Seattle Center, the site of Seattle PrideFest. It’s happening RAIN or SHINE, but it looks like it’s gonna be ALL shine, so schmeer yourselves with sun screen and make sure you have PLENTY of water.

There are announcing booths at the Westlake Plaza, with Aleksa Manila; 4th & Bell with Mama Tits and Sylvia O’Stayformore (there’s also a beer garden at that location) and The Seattle Lesbians have a station at the tail end of the parade.

There are dozens of groups and businesses participating, so expect a looooong parade…it should be in the 2 and a half hour range…

Here’s the Map to the Parade Route.

On Sunday, June 30, 2013, Seattle Pride will host its 39th annual Pride Parade starting at 11:00 AM. The parade kicks off at 4th Avenue & Union streets, and will proceed north down 4th Avenue to Denny Way. It will last approximately two and a half hours and will be held rain or shine.

For parade contingents, it should take about an hour to travel the distance. The parade will end at 2nd and Denny Way near Seattle Center. Once contingents complete the parade route, foot traffic will proceed north on 2nd Avenue. All vehicle traffic will continue west along Denny Way to Warren, where drivers will secure their vehicles, and leave the area. Parade volunteers stationed at the intersection of Denny Way and 2nd Avenue will help assure the safe and orderly flow of the parade participants out of the area. Pedestrians crossing at Denny Way is restricted to the east side of 4th Avenue.

The Parade announcers’ booth and media viewing area will be located at Westlake Park on 4th Avenue between Pike and Pine streets. Seattle Out & Proud asks that all those attending the parade watch from the sidewalks, to leave the street open for contingents.

ADA viewing areas are available at Westlake Plaza and on the east side of 4th Avenue and Bell Streets. ASL Interpreters will be available at both Westlake Park Announcer Stage and 4th and Bell Street Announcer Stage. No parking will be permitted in any area along the parade route and all vehicles must be registered, display an Event Pass and have a driver in the vehicle at all times. Unattended vehicles will be towed at the owner’s expense.

There are five intersections along the route that Metro buses will periodically cross the parade route. Seattle Police and Seattle Out & Proud personnel will be on hand at these points to assist. Thanks for your participation and cooperation.