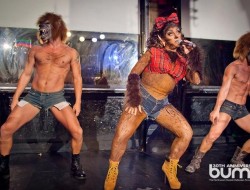 Last weekend kicked off Halloween season in earnest with some major events (after all, we did see a LOT of costumes and zexy skin this weekend!), but it isn’t over yet! Halloween proper is this Thursday and there’s a bunch to see and do!

Let’s start with the BIGGIE! Shall we? Ben Delacreme gets all hosty at BUMP! this Thursday at Neighbours!

For 30 years, BUMP has been a monster benefit, and this year is certainly no different. RPDR alum ALYSSA EDWARDS and Scissor Sisters front man, and wearer of the sexy pants, Jake Shears will be headlining, and is hosted by the always adorable and scintillating Ben Delacreme. By the way, if you haven’t seen FuckYeahBenDelacreme, then you are missing out! Remember, the costume contest competition is really stiff (*ahem!) so don’t half-step it!

Includes admission to BUMP!, featuring Alyssa Edwards, with DJ sets by Jake Shears and DJ Sammy Jo, as well as admission the official BUMP! after party.

Halloween is always a tough party night, because there’s always another thing that you want to go to. Make no mistake, we’ll be at BUMP! too, but we’ll also be checking out REVOLUTION, The Baltic Room’s Thursday night adventure featuring hostesses Olivia LaGarce and Donnatella Howe. Their Halloween offering will be, as the kids used to say, off the chain! To make REVOLUTION even MORE appealing, there’s NO FREAKING COVER! I’ll say that again for effect – THERE’S NO FREAKING COVER!!!

REVOLUTION THURSDAYS. The hottest hip hop, top 40 dance party on Capitol Hill. At World’s End will be the craziest, Hottest Halloween Dance Party of the year! Huge Prizes ,Amazing Performances, Best Mashups and music on the hill… and it’s FREE!!

Did we mention, THERE’S NO FREAKING COVER!!!

The Sisters’ Nightmare: Welcome to the Asylum There’s always going to something about a nun in black sclera contacts to make your blood run cold. But, the beloved Sisters of Perpetual Indulgence, the Abbey of St. Joan will be hosting The Sisters’ Nightmare at RPlace, offering some some kinda major cash prizes for their costume contest. The paltry $10 cover helps fund their Community Grant Fund, so give generously – that’s a bargain at twice the price!

It’s the dark time of year! And you’ve been locked up in the asylum!
It’s time, once again, for yearly costume contest and partying until the witches fly and the ghouls settle back down!

CASH PRIZES for best costumes! So, come and show us what you got! Bring your creativity and show your dark side, or your light side! Contest starts at the witching hour (midnight)
Cash prizes include $250, $500, and $1000