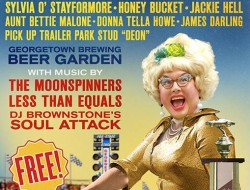 Sylvia Goes To The Trailer Park…Trashy Drag Fun Is... 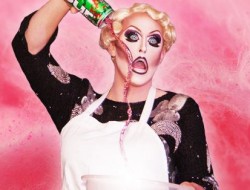 August 9, 2014 Comments Off on What RuPaul’s Pop-Up Shop Taught Me About America Views: 1686 Drag, Pop Culture

What RuPaul’s Pop-Up Shop Taught Me About America “Steven, do not go there under any circumstances” my friend Jane told me when I announced I was going to be exploring the “mystifying socio-cultural conditions” of Hollywood and Highland. “It is a heinous blight that will make you hate LA,” she responded bluntly. But awful things are my favorite things, I told her. I once went to a Kidz Bop performance and had the time of my life. I’m fascinated by trashy things, so long as I can analyze them later with a microscope.

One muggy day, I drove over to the Chinese Theater and Walk of Fame to see what thousands of Trip Advisors had called “okay, a decent waste of time.” Parking, I found, was only $2.50 per 12 minutes(!) Leaving the car, I spotted Elvis and Charlie Chaplin impersonators sitting outside a Coffee Bean, as if to provide confused tourists with a visual prelude.

As I walked down the (figuratively) star-studded street, I realized my friend was right. Hollywood Boulevard wants you to feel like you’re having a “brush” with celebrity, but all you’re brushing up against are grown men wearing children’s Halloween costumes. “Come on!” I shouted into the universe. “Is this all you got?”

Then I spotted something amazing. RuPaul’s Pop-Up Shop. “Yes,” I thought. “That is the kind of trash that I love. Give it, feed it to me. Now.” I strode past a group on an audio tour of the mall and took an elevator to the store.

“You look like you’re walking on sunshine,” remarked the 17-year-old behind the counter as I glided in.

“I just…love him,” I explained matter-of-factly, staring up at a photo of RuPaul wearing a blond afro wig.

“Are you from here?” she asked.

“No, I’m from West Hollywood.”

“Oh wow!” the young woman exclaimed. “It’s supposed to be cool there.”

I was confused; West Hollywood was five blocks from our location. But I really wanted her to think WeHo — and me, by extension — were supercool, so I tried to muster some enthusiasm.

“I don’t think gays should have to live separately from society,” the young woman suddenly proclaimed.

“Me neither,” I said, slightly taken aback by her not-so-profound revelation.

Having tried, and failed, to not fondle a mannequin wearing last season’s pink feather dress, I moved to a new location in the store.

“I’ve never been to a gay bar but I want to,” the young woman said.

“You work for RuPaul but you haven’t been to a gay bar? Girl, you’re doing life backwards,” I laughed.

“My boyfriend would never go with me.”

I inspected a dress-sized RuPaul tank top that cost $50 while considering how I might dissuade this young woman from continuing to date a bigot.

Without pause, she held up RuPaul’s book “Lettin’ it All Hang Out.”

“It’s really interesting,” she said, handing it to me. “It’s all about how he struggled being an outsider. He writes that it doesn’t make sense why some boys can dress up like cowboys but he can’t dress up like a woman.”

The young woman looked saddened by RuPaul’s struggle for acceptance.

“Don’t worry” I replied. “ We have Bravo, you know? And gay marriage, in most places. Don’t cry for us.” I tried to laugh.

“I really, really want to go to a gay bar,” the young woman said again.

Noticing the circular nature of our conversation, and how defensive it was making me feel, as if my identity was something to have a pity party over — IN RUPAUL’S POP- UP-SHOP, NO LESS — I started heading for the door.

Back on the streets of Hollywood Boulevard, I felt more confused than ever. It used to be that the people you met at gay bookstores, sex shops and community centers were, in some ways, your spirit guides to gay society. I remember wandering into a gay bookstore in London years ago and feeling like I’d found a slice of home.

But this was the magic of true equality: a store devoted to what was once a subversive activity — dressing up in drag— staffed by people completely unconnected to the struggle for gay rights.

I realize that at the end of the day, the more people unconnected to the struggle for gay rights exposed to gay culture, the better. If you’re working at a RuPaul Pop-Up shop and haven’t been to a gay bar, that’s amazing. That’s so 2014.

I texted my friend: “Hollywood and Highland just reaffirmed my faith in America.”

She didn’t text back.

Steven Blum is a writer formerly known as “The Stranger’s Public Intern”. He used to live in Berlin, Germany.