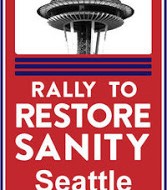 Views from a VanDyke: The Rally to Restore Sanity... 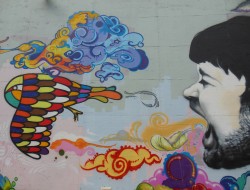 December 5, 2014 Comments Off on A Night in Pioneer Square on First Thursday Views: 2609 Editorials

Remember the 619 Building? I don’t know if that was its official name, but I do recall that it was the best damn thing about art walking on First Thursdays. Six floors of nothing but starving artists eager to speak about their work over saltines and two-buck-chuck wine. Its last days before getting torn down due to the viaduct renovations (yeah, how’s *that* coming, by the way?) were pretty epic among the young artist community.

Admittedly I haven’t done an art walk since then. But a friend of mine invited me to see some of his stuff on display, so of course I battled rush hour traffic through the city to check it out. He participated in the 30 Day Art Challenge, among about 100 other artists, including Ballard favorite Henry.

Whenever you see crazy alien/monsters in an ad for “Lexnarf,” that’s Oscar Baechler. I asked him, “So was the challenge a piece per day for thirty days, or what?” And he replied, “Yeah, the artists had thirty days to do as much art as they could, give or take four days, cuz paint has to dry I guess.” Oscar is the most chill dude with the wickedest imagination. His Lexnarf series basically replicates vintage ads, if those ads were posted around a spaceport in the Star Wars or Firefly universe. As a result, his pieces were by far the funniest of the 30 Day Challenge show.

Held at the TK Artist Lofts, the rest of the pieces gave a little bit of everything: portraits, flowers, mixed media, skulls, words & quotes, pop culture, black & white, landscapes, comic strips, 3D, and boobs. People could walk in, take what they liked off the walls, and purchase whatever for the flat rate of $50 each. Wish I’d had the money! The place was kid-friendly, although there were so many people packed into the space I had no idea how people kept track of their kids or dogs. A wall at 30 Day Art Challenge When I couldn’t breathe anymore, I walked outside and consulted the Art Walk Map, provided by pioneersquare.org. I started off with a direction in mind, but ended up moseying around, looking for the window with the art that would move me. I think I ended up in CMD*P on Yesler, a spot with a few different artists. The windows drew me in, but it was down a long hall and the sound of music that drew me to the Aubry Kae Andersen exhibit. Definitely more interesting with fantastical, queer, and dreamy art. Possibly influenced by Neil Gaiman, but I didn’t get to speak to the artist. Nibbling on an Oreo helped the journey to continue.

After stopping in another gallery focused on French-inspired stuff, and a Dark Chocolate Milky Way, I found myself dodging unfriendly and cracked-out people asking for quarters and cigarettes. Just when I started to walk back downtown to catch a bus, I saw the Pioneer Square I remembered from random summers gone by: the park where the artists all come together like a farmer’s market crossed with a tent city to sell their stuff. The trees were lit up simply—just festive enough, but not so much you’d puke from Christmas joy. And there, of course, was Comedy Underground. (Cue angelic music.)

For the low price of $12, the audience was treated to four comedians, with one headliner. But before that, a drink at the bar. The sportsball bar. Where guys chatted about how much money they had riding on a game, and one dude drank PBR through a straw. Naturally. I awaited the show over a vodka soda and a tequila shot while trading tweets about the Black Lives Matter protest and hoping my friend was ok. I’ll leave comments about that up to you and your Facebook rants. Guess the universe told me to laugh rather than head downtown.

Ok, um, guys? If you want a literal *mountain* of nachos, Swannies at Comedy Underground has it. Seriously. It’s shaped like a mountain on a plate, with cascading cheese and a sour cream peak. If I weren’t so hungry I would’ve been scared. But I digress. The small crowd (running joke was exactly twelve people) was made up of a regular in the front row and a bunch of people on dates. Anthony, the emcee, kept everyone in good spirits, and after the show I told him he looked fabulous for Capitol Hill (as in, Seattle knows nothing about fashion and he’s from New York). James Milton, the first on stage, presented some dry humor and made for a good opening act. The second, Mitch Burrows, was supposed to have won comedy awards and such, but he said the places he won the awards don’t air in Seattle, so go figure. What I liked about him was that he passively made sure you knew he had a brain even though he played into the “all Southerners are dumb and racist” stereotype.

But the headliner? Nathan Brannon was a trip! He spoke about a lot of different stuff, not the least of which was his being a black dude from Portland married to a Norwegian from Walla Walla. He does have a CD out on cdbaby, called “I Black Out.” Haven’t downloaded it yet, but by far the quote of the night was, “Keeping a shotgun in your house just in case the government comes after you is like keeping a chimp just in case Planet of the Apes happens.” Nachos almost ended up on the floor! It was only about four hours I spent in Pioneer Square. Now, I don’t frequent it often (living in the north end of things), but from what I saw, the place is culturally and economically at a crossroads. While everywhere else is dealing with gentrification, condos, rent hikes, and bro-grammers, the Square seems to feed on chic businesses and gastropubs—yet the locals are by far not the rich, gentrified clientele. The Mission I passed was overflowing. Art walkers were 20-somethings from UW in search of free wine and snacks, or else baby boomers from the likes of Redmond, all wanting to speak pretentiously about pretentious art as if Seattle is The Met. The more down-to-earth people were usually family members of the artists at the 30 Day Challenge.

What is to be said about this? That the Square’s money chiefly comes from tourists and sportsball people? LGBTQs, get off your asses and leave the Hill next summer! Support the local artists who aren’t getting attention at the markets or colleges. Build another 619. Let’s get a little more diversity in Pioneer, get married at the Shotgun Wedding Chapel, and bring a little Seattle identity back to our oldest neighborhood.