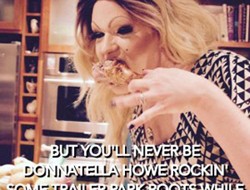 Revel in the Sweetness with Seattle’s Sexiest Nutcracker!

December 7, 2014 Comments Off on SPOILER ALERT: The REAL Cast List For S7 Of “RPDR”…And, It Doesn’t Include Any Local Gals Views: 3373 Arts & Entertainment, Drag, Drag O'Tainment

SPOILER ALERT: The REAL Cast List For S7 Of “RPDR”…And, It Doesn’t Include Any Local Gals If you don’t want to see the REAL cast list for Season 7 of Logo TV’s “RuPaul’s Drag Race” then stop reading this and get the hell off of social media….’cause as I write this, its 6:36 pm PST on Sunday, December 7, 2014 and that list has already been OFFICIALLY released via Logo on tonight’s airing of their NewNowNext Awards which have already aired on the East Coast but not on the West Coast. If you want to be spoiler free for the telecast which starts here in a couple hours, then get off the Internet and go for a hike or make out with some one you met on Scruff.

For the rest of us, here’s the list of 14 queens competing….and, no….DonnaTella Howe is NOT one of them. That was a clearly marked JOKE. There are NO queens from Seattle or the Pacific Northwest competing this time around. In fact, there is only ONE West Coast contestant, Jasmine Masters from Los Angeles. There are, however, three lovelies from the Midwest! And, the obligatory Puertorriqueña…haven’t they run out of queens yet? The first few were good but they hit bottom of the barrel 3 yeas ago….

Maybe it’s a good thing they’ve cast the show this time with lower profile names. It will allow the show to get back to being more about a real competition instead of well known WeHo gals angling for a boost to their media careers. Though it does suck that none of the many Seattle gals who audtioned didn’t make it on this time, it will be a relief to not go through “Local Contestant Mania” like we had to do with the last two years, via Season 5 winner Jinkx Monsoon and Season 6’s popular BenDeLaCreme who was 4th runner up last year.

And, we’ve already decided, on the spur of the moment and solely based on a couple photographs, to be #TeamTrixieMattel but we’re guessing that could change by the end of the first commercial break of the first episode next month.

Now, if only RuPaul would drop that awful Santino Rice.