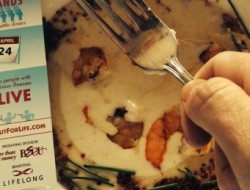 Act Up! Dine Out! Fight AIDS! 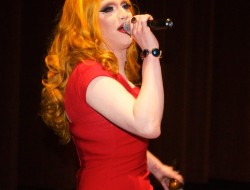 The Leather scene in Seattle is hot, sexy and queer. And the new Washington State Ms. Leather 2015? Yep, all of the above. Liliya has a commanding presence, a sultry gaze and the demeanor of a hard femme top that makes this masochistic bottom a little weak in the knees. At this year’s Washington State Mr./Ms. Leather and Bootblack contest held during Leather Pride Week at The Cuff, I got to witness one of the hottest fantasy scenes ever (think Orange is the New Black) created by, directed by and starring Liliya as Pornstache. Forever in my memory, she will have a woman on her knees below her giving her a blow job. I had the pleasure of sitting down with her to ask her about her new title among other things.

Kate West: When and how did you discover the Leather community?

Liliya: I discovered the local community here when I moved back to Seattle after being in Arizona for about 10 years. When I came here the first two people I met on OK Cupid were in the Leather community! And another friend I knew was in it and they said the community was very open and accepting and there’s all kinds of people in it and I should come check it out. So I think the first event I ever went to was the monthly dress social that Seattle Men in Leather holds and I’ve hardly missed any of those ever since in the years I’ve been here.

KW: If you could tell someone who knows nothing about Leather one thing you think would surprise them, what would it be?

Liliya: The diversity of people who belong to the community. If you stick around and get to know folks and they get to know you, you’ll discover just how diverse the socio-economic classes are within the members of the community. There’s people who are everything from baristas to attorneys and that’s really cool. So even if you don’t know what people do for a living or what their education is . . . of course that influences what they bring to their play and contributes a lot. People might be surprised at the different backgrounds in the culture that we’re building. KW: What made you decide to run for the title of Washington State Ms. Leather?

Liliya: People will say funny things about the titles like, “Oh you’re just a thwarted prom queen! You wanted to be prom queen and you never got to!” And maybe that’s a little bit true . . . . And another thing that often gets discussed is if these contests are really relevant anymore, why do we still do them, and why should anyone run for a title. There are different positions in every community and people find ways to serve and these titles are service titles. You might have a sash but it’s not yours; it’s a heritage piece, a community piece that gets passed on from title holder to title holder. That sash is a reminder of what you’re there to do: you’re there to represent and speak for the community, you’re there to help the community in any way they need you and to be a leader, to lead by example. I ran because I wanted to contribute to the community and make it a better and stronger place.

KW: What are your plans for community outreach/service during your title year?

Liliya: One of the things we do as title holders is fundraisers. We choose non-profits to help that support LGBTQ issues. We steer away from politics and religion and focus on groups that have an agenda to help in some way. So we go through a process of choosing groups we want to help and I’ve been reaching out to friends in non-profits, friends in the Leather community, friends in the greater LGBTQ community to get suggestions for local and state organizations. I’m specifically looking for smaller groups where a few hundred or few thousand dollars could make a big difference as opposed to bigger groups that get big grants.

We’re also planning to do a lot of in-state travel to reach out to smaller Leather communities around the state as well as reaching out to other groups in the larger LGBTQ community. We’ll be reaching out to smaller Leather groups to do meet-and-greets, classes and fundraisers to help them out and do outreach in that way. One of our jobs is to be visible for those who can’t be visible so we’re here to do that too.

KW: If you could choose one of the most fun kinky things you’ve done, what would it be?

Liliya: I once put out the candles on someone’s birthday cake by pissing on them. That was an interesting scene!

KW: Which colors do you flag?

Liliya: I flag black, yellow and red on the left, and hunter green on the right. (Go here for a guide to the Leather hanky code.)

If you would like the opportunity to meet Liliya or any of the other Washington State Leather 2015 titleholders in person, come out to Fetish Night at C.C. Attle’s from 6 pm to 2 am this Saturday, May 2nd. All proceeds benefit PFLAG.