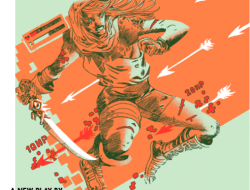 Put Down Your Headset. “From Kings to Controllers” Hits... 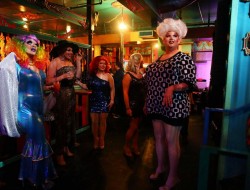 Anticipation is a cruel mistress. It’s heart breaking when you get your hopes up about anything…a visit to a new restaurant from your favorite chef, or your first trip to Disneyland, or a date with the cute new guy in Accounting, or seeing a play or musical for the first time…especially when you’ve loved the score for 25+ years.

But, sometimes that new restaurant blows it…or, “The Haunted Mansion” is closed for repairs…or, that new guy is a deadly bore who likes to proclaim “I love humidity!”…or, the libretto of that musical you’ve loved for two and a half decades is a tad turgidly verbose and doesn’t really match the quality of the music.

That’s part of my problem with the 5th Avenue Theatre/ACT’s current co-production of Stephen Sondheim’s cult musical, Assassins, his oddball take on the madmen (and two women) who tried to kill the President of the United States, as well as the 4 men who actually succeeded. Mr. Sondheim’s witty lyrics and clever pastiches of songs relevant to each time frame the assassins lived in, was a huge winner for me in 1991 when I became enamored of the original cast album of the Off-Broadway debut of the show (Assassins didn’t make it to Broadway until 2004 where it won 5 Tony Awards). For me, the songs clearly told the story of those assassins; there is some dialogue included on that album, including the entire Lee Harvey Oswald segment and the story as presented really worked very well; it had a clear cut through line. But, though I’ve been a huge fan of  Assassins ever since I haven’t had the opportunity to actually view a production until this production at ACT.

Sad news to report: I’m still a huge fan of Sondheim’s songs but I’m afraid I’m less enamored of the libretto by John Weidman. Several lengthy book scenes added little to the strength of Sondheim’s music. There’s a clunky and dull exposition scene between Leon Czolgosz, the assassin of William McKinley, and his “muse” the anarchist revolutionary Emma Goldman, that just….plops itself into the show. It’s also very odd that the Goldman character is the only non-assassin character in the show which focuses on nine actual killers/attempted killers. Czolgosz is the only one of the nine to get a secondary character to play off of. It’s just sloppy play writing.

There’s also two long monologues featuring Samuel Byck, the very minor attempted assassin of Richard Nixon. The monologues are actually well written (and well acted by Matt Wolfe) but they also seem plopped into the material. The Byck character also doesn’t get a song of his own (he sings in some group numbers) and it sort of feels like he’s just here because he’s “colorful” and “quirky”. He’s just another kook to round out the numbers.

And, that’s at the heart of what’s wrong with Assassins. Sondheim and Weidman are trying to say that these dangerous kooks are a scary but important part of American life but…all these kooks aren’t created equally. The premise of Assassins is that it’s set in a Limbo/Purgatory that looks a lot like a run down carny midway, that’s overseen by a menacing lout simply called “The Proprietor” (Nick DeSantis in a clever bit of casting against type) who arms and encourages 8 of the killers. There’s also a “Balladeer” character who sardonically comments on the actions of the 8…but, towards the end of the show, those 8 original killers gang up on the Balladeer and goad him into turning into Lee Harvey Oswald, the assassin of John F. Kennedy. They tell him they need Oswald to kill Kennedy to lead them out of obscurity….his act will validate all of them.

It doesn’t really work…or, make that much sense. The killers in Assassins consist of 4 “successes”: John Wilkes Booth, Charles Guiteau, Leon Czolgosz, and Lee Harvey Oswald, and the five “failures”: Guiseppe Zangara (who tried to kill FDR); Lynette Fromme and Sara Jane Moore who both tried to separately kill Gerald Ford; John Hinckley who shot Ronald Reagan, and Sam Byck’s nutty attempt to hijack a plane and fly it into the White House. Of the nine, only Booth and Oswald are names anyone remembers. Guiteau and Czolgosz killed rather bland Presidents over a hundred years ago…no one cares. The failures are minor footnotes at best; ironically, this musical has kept their names alive longer than their actual crimes. On paper, the whole “the Assassins exist in Purgatory” idea is interesting…though it doesn’t make a whole of sense right now due to the fact three of the assassins are still alive (Fromme and Moore, both released on parole within the last few years; Hinckley is still in prison). It’s a bit unclear how the currently living are occupying a place in metaphorical Purgatory…but, that’s what imagination is for!

This current version of Assassins is also different from the original off-Broadway production/album. Originally, the Balladeer and Oswald were two separate characters. And, Sondheim added a very weak song to the show for its London debut, “Something Just Broke”, a maudlin ode sung by “average folks” lamenting the horrors of what the assassins have wrought by their actions. It’s oddly plunked between the powerful Lee Harvey Oswald section that contains a big group number (and the anthem of the show, called “Another National Anthem”) and the big finale featuring “Everybody’s Got The Right”. It’s not a good song and seems like a rather bland attempt at softening the material with a weak “See what these devils have done!” to lessen any criticism that the material is too reverent towards the killers. All it does is weaken the show itself.

As for this production of Assassins, I also have to give it a mixed grade. There are things I liked very much about it and…things I didn’t. Due to the odd seating assigned to most of us critics, it’s actually difficult to critique some aspects of the production…I really can’t critique the intent of John Langs’ staging. From my angle, I had no way to view his mise-en-scène, (a $12 word meaning placement of components on the stage); I could only see half of his intent…the same goes for the lighting and set design. My half LOOKED pretty good but who knows… I could see and appreciate the costume work of Melanie Taylor Burgess which includes looks scattered over a hundred years of history and especially liked the “faux tattoo” shirt designed for Nick DeSantis.

As mentioned above, Mr. DeSantis was quite good as The Proprietor as was the also mentioned above Matt Wolfe as Byke. Brandon O’Neill was appropriately dour as the rather dour Czolgosz and John Coons was delightfully dyspeptic as the attempted FDR assassin Zangara. I also liked Frederick Hagreen as John Hinckley while also lamenting the horrible wig he’s made to wear in a vain attempt to make a thin attractive actor look like the lumpen Jodie Foster loving killer…

Kendra Kassebaum pretty much steals the show as the wacky housewife Sara Jane Moore as does Rich Gray as Guiteau, the narcissistic buffoon who killed James Garfield. They’re both richly comic performances and it’s a bit unfair that Guiteau/Gray gets a terrific musical number (“The Ballad of Guiteau”) while Moore/Kassebaum have to share one song with other performers. Ms Kassebaum has the biggest pipes in the show; it’s a shame she doesn’t have a chance to bring down the house.

I wasn’t a fan of either Louis Hobson’s John Wilkes Booth or Laura Griffith’s Squeaky Fromme. Mr. Hobson pulls off the “hammier’ aspects of Booth but not the required drama. Ms Griffith is playing Fromme too seriously…there’s no light in this performance that requires a bit of spacey airiness. And, Nathan Brockett lacks the gravitas to anchor his dual roles as Balladeer/Oswald. His performance is fine but it never inspires.

Assassins is a mixed bag of delights and disappointments. Sondheim’s superb score is still there and there are some strong performances and design work. A dreary libretto and some miscasting does dampen the proceedings to a degree.  It’s up to you to decide if Assassins is “worthy of your love”.