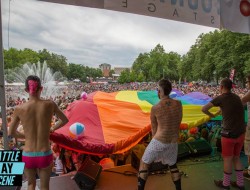 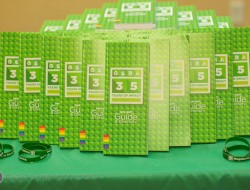 It wasn’t too long ago—last year, in fact—that lesbians had practically nowhere to go in Seattle to experience a drag *king* show. Frankly, it was one of the biggest elements missing from the queer community.

NG Langston changed all that with Dapper Down Productions.

Since December 2015, she’s been hosting, planning, and creating events revolving around lez/trans-centric drag at venues like Re-Bar and Unicorn. She comes from years of experience, performing as “Tricky Dick Dodger” back in Charleston, SC. These days, she aims to cultivate a sense of community among the female-identified and trans/gender-fluid folks by producing shows at safe places, mainly with proceeds benefitting non-profits and youth organizations.

I’ve had the pleasure of speaking with Langston, and I can tell you she’s passionate about what she does. She’s gained some clout in the community in the short time since splashing onto the scene, and is known for her professionalism in taking care of every detail of DDP’s events. Her primary concerns are safety, the beneficiaries, and of course putting on excellent entertainment for all who would enjoy it. Langston attended the active shooter training seminar on the 20th, and you’d better believe she’ll be true to her word in keeping all of DDP’s events as safe as possible.

That said, we are thankful and STOKED that Pride 2016 AT LONG LAST will feature diverse drag king performances! Here’s the rundown of Dapper Down’s events: 6/23: It’s the official “Pre-Funk” at Re-Bar! Headlining will be the famous Spikey Van Dikey all the way from Florida, making his Seattle debut. DJs Trinitron and MIXX America shall spin for your listening pleasure. A $10 cover and all other proceeds (100%) will go directly to the Pulse Orlando fund. Ladies*, this is your OFFICIAL Pride kick-off event, and you can bring your generous dollars to the aid of Pulse victims and their families before your wallet runs dry on Sunday. 6/24: “Kings for Kids” will be a huge show benefitting the It Gets Better Project! The Dapper Down cast joins kings from Tacoma, Florida, and California for an 18+ drag fest at the Fred Wildlife Refuge. 21+ after party to follow. General admission is $15. That night at 8pm, see the kings perform again (or in case you missed them) at “Love in the Wet Hole” at Rumba Notes Lounge, hosted by Save the Drama for Your Mama Productions.

6/25: Interested in performing? Want to meet Tricky Dick Dodger? DDP will have a meet ‘n greet booth at the Capitol Hill PrideFest on Broadway. PrideFest is all-ages and free to attend. Go say hi before the Dyke March!

6/26: DDP will be seen marching in the Pride Parade along with Nubian Pride Productions and Queer Black Alliance of South Sound. If you’re not completely Pride-ded out by 8pm, head over to Unicorn for “The After Party” with the Dapper Kings, Spikey Van Dikey, and Miss Petite Coquette. Coquette is the founder of Black Diamond Burlesque in Sarasota, FL. Only $5 at the door to sit back, relax, and soak in some eye candy.

Advance passes for the entire weekend seem to be sold out, but tickets for individual events can still be purchased.

Lezzies*, congratulations. It’s high time someone brought a little more diversity to our scene and offered us something more than what we’re used to. Happy Pride, keep kissing, #oneblood, and take care of each other. Oh yeah, and don’t forget to hydrate!