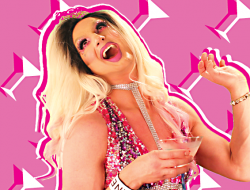 Verotica Dishes With Teriyaki About: Dolphins, Drag, And Her... 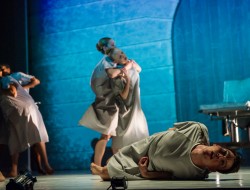 HUGE Plans Being Made For #Stonewall50″ for NYC Pride in 2019 It’s also NYC Pride Week and they’re already making plans for NYC Pride 2019 which will be the 50th Anniversary of the Stonewall Riots which helped ignite the modern gay rights movement. “One World, One Pride, One New York City – Unite in 2019” will be the theme and NYC Pride 2019 is also being designated as a World Pride event.

More poo on this big announcement. If Herr Drumpf doesn’t destroy us before then, this will be a YUGE global event.

New York City (June 20, 2017) – NYC & Company, New York City’s official destination marketing organization, today joined with Heritage of Pride, organizers of NYC Pride, to formally announce the two-year countdown to WorldPride 2019. Set to take place in New York City in June 2019, the global celebration of Pride will coincide with the historic 50th anniversary of the Stonewall Riots—the birthplace of the modern gay rights movement—making it a year to underscore New York City’s progress and resilience as a global LGBTQ capital. The announcement was made as New York City’s 2017 Pride celebrations are currently underway this week. A new invitational campaign, titled “One World, One Pride, One New York City – Unite in 2019” launched yesterday in New York City, with additional promotion and activations taking place in Madrid during the upcoming WorldPride celebrations there June 23–July 2.

“As a city with such a rich history of fighting inequality and an unwavering dedication to social progress, we are thrilled to host WorldPride 2019,” said Mayor Bill de Blasio. “I can think of no better time to celebrate the LGBTQ community than on the 50th anniversary of Stonewall—a seminal moment in the struggle for inclusion and human rights that has reverberated across the country for decades.”

“New York City is one of the world’s most iconic LGBTQ destinations, and we look forward to taking the baton from Madrid as we begin the two-year countdown to WorldPride 2019,” said Fred Dixon, NYC & Company President and CEO. “To have this extraordinary event in New York City coinciding with the 50th anniversary of Stonewall makes it that much more meaningful as we welcome the world and celebrate the continued progress of our city’s LGBTQ community.”

In New York City, the new “One World, One Pride, One New York City – Unite in 2019” invitational campaign, celebrating the City’s diversity and inviting the world to unite around WorldPride in 2019, will appear on more than 100 bus shelters and LinkNYC screens across the five boroughs and on nycgo.com, the official tourism resource of the five boroughs. A new one-minute video, filmed in the West Village and inviting travelers to New York City for WorldPride 2019, can soon be found at nycgo.com/worldpride.

Additional promotion will take place during WorldPride Madrid’s festivities next week, including a public experiential activation, a presence in the WorldPride parade and other outdoor media advertising. NYC & Company will also participate in a handover ceremony with Madrid officials and hold a press conference for LGBT and travel/lifestyle media in partnership with NYC Pride.

“We’re thrilled to be working with NYC & Company to bring WorldPride to New York City in 2019 to commemorate the 50th anniversary of the Stonewall Riots,” said NYC Pride Managing Director Chris Frederick. “These events are expected to draw 3.1 million people to the birthplace of the modern LGBTQ rights movement. In the months ahead, we look forward to unveiling a full roster of programming that will inspire, educate and commemorate this important moment in our collective history.”

During the 2019 WorldPride celebration in New York City, NYC Pride will feature its own “Millions of Moments of Pride” campaign. The initiative is based on the premise that everyone remembers their first Pride and everyone has their own unique Pride story to share. At Stonewall 50—on the grand stage of New York where the modern LGBT movement was born—NYC Pride will provide a platform to celebrate Pride and continue to advocate for equality.

In partnership with ManAboutWorld, NYC & Company has also launched new LGBTQ content at nycgo.com/worldpride. Information about NYC Pride 2017 along with a Pride Survival Guide and additional five-borough content providing visitors with information to plan their perfect NYC experience are part of the content offerings.

New York City is the number one LGBTQ travel destination in the United States, according to CMI’s 21st Annual LGBT Travel Survey.

For more information on this week’s NYC pride festivities, go to nycgo.com or nycpride.org.

NYC & Company is the official destination marketing organization for the City of New York, dedicated to maximizing travel and tourism opportunities throughout the five boroughs, building economic prosperity and spreading the positive image of New York City worldwide. For more information, visit nycgo.com.

About Heritage of Pride

Heritage of Pride is a nonprofit organization that plans and produces New York City’s official LGBT Pride events (“NYC Pride”) each year to commemorate the Stonewall Riots of 1969 — the beginning of the modern LGBT movement. Heritage of Pride works toward a future without discrimination where all people have equal rights under the law. We do this by producing LGBT Pride events that inspire, educate, commemorate and celebrate our diverse community. For more information, visit nycpride.org and stonewall50.org.