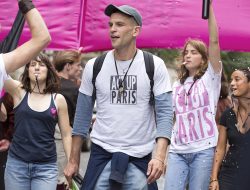 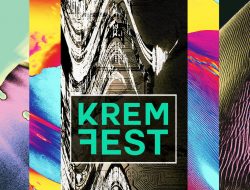 Seattle based artist JONO VAUGHAN has won the 2017 Betty Bowen Award for he r ongoing PROJECT 42 honoring transgender lives. One piece from the series “Tiffany Berry” is on display at the Minnesota Museum of American Art in the exhibition “We the People”. Photo: Jono Vaughan

Seattle artist Jono Vaughan is the winner of Seattle Art Museum’s Betty Bowen Award, a highly prestigious honor for Pacific Northwest artists since 1977 and one that comes with a prize of $15,000 and an exhibit at SAM.

Vaughan was honored for her work with her ongoing series Project 42 which is named for the short life expectancy for most transgender people in the US. The multi-media project incorporates the design of fabric which is turned into a garment to represent one specific transgender individual who has been killed, then a public performance by an artist representing and honoring that life. Currently, the Minnesota Museum of American Art has displayed Vaughan’s memorial garment for “Tiffany Berry” and local theater company Mixed Blood collaborated with the museum in a performance that used the garment to honor Tiffany Berry.

Jono Vaughan and two special recognition winners will be honored in a free public ceremony at SAM on November 9, 2017. Go here for info on that event.

SEATTLE, WA – The Seattle Art Museum (SAM) and the Betty Bowen Committee, chaired by Gary Glant, announced today that Jono Vaughan is the winner of the 2017 Betty Bowen Award. The award comes with an unrestricted cash award of $15,000. Founded in 1977 to continue the legacy of local arts advocate and supporter Betty Bowen, the annual award honors a Northwest artist for their original, exceptional, and compelling work. Jono Vaughan’s current work memorializes transgender individuals whose lives were cut short by violence. She creates handmade garments that are then used in collaborative public performances. Her work will be featured in an installation at the Seattle Art Museum April 21–August 5, 2018.

The award ceremony honoring Jono Vaughan, Deborah Faye Lawrence, and Ko Kirk Yamahira will take place on Thursday, November 9 at 6 pm at the Seattle Art Museum. The ceremony and reception are free and open to the public. Go here for details.

Jono Vaughan’s ongoing series Project 42 is named for the short life expectancy of transgender individuals in the United States. The project, begun in 2012, aims to raise awareness of a persistent pattern of extreme violence against trans people by commemorating 42 murdered individuals. For each work in the series, the artist designs a garment that begins with an image of a murder location, which is then digitally manipulated to create an abstract textile print. The garment is then worn by a collaborator in performance, as a form of memorialization and celebration of the victim. Vaughan hopes this accessible approach will provide an opportunity for engagement and discussion.

Vaughan holds a Bachelors of Fine Arts from the School of Visual Arts in New York City and a Masters of Fine Arts from the University of South Florida in Tampa. Her work has been exhibited nationally and internationally in both solo and group exhibitions, including the recent exhibitions MOTHA and Chris E. Vargas Present: Trans Hirstory in 99 Objects at The Henry Art Gallery at the University of Washington and We the People at the Minnesota Museum of American Art. Vaughan has received grants for a variety of visual art projects from The Arts Council of Hillsborough County, The National Performance Artist and Visual Artist Network, Art Matters Foundation, and the Pollination Project. She teaches Fine Art at Bellevue College and works in her studio in Seattle, WA.

Deborah Faye Lawrence uses the medium of collage to analyze, categorize, and make meaning. She confronts and comments on social, emotional, historical, and current events through the process of cutting, manipulating, and composing found information. Her appropriation and re-contextualization of found images and other materials, including maps and flags, points to a tradition of politically engaged collage, while satirically and incisively addressing contemporary concerns.

Formally, Ko Kirk Yamahira’s work traverses the boundaries between painting and sculpture, composition and decomposition. Interested in notions of self that encompass diverse and contradictory elements, his compositions aim to visually articulate these themes in abstract terms.

ABOUT THE BETTY BOWEN AWARD

Betty Bowen (1918–1977) was a Washington native and enthusiastic supporter of Northwest artists. Her friends established the annual Betty Bowen Award as a celebration of her life and to honor and continue her efforts to provide financial support to the artists of the region. Since 1977, SAM has hosted the yearly grant application process by which the selection committee chooses one artist from the Northwest to receive an unrestricted cash award, eligible to visual artists living and working in Washington, Oregon, and Idaho.

As the leading visual art institution in the Pacific Northwest, SAM draws on its global collections, powerful exhibitions, and dynamic programs to provide unique educational resources benefiting the Seattle region, the Pacific Northwest, and beyond. SAM was founded in 1933 with a focus on Asian art. By the late 1980s the museum had outgrown its original home, and in 1991 a new 155,000-square-foot downtown building, designed by Robert Venturi, Scott Brown & Associates, opened to the public. The 1933 building was renovated and reopened as the Asian Art Museum in 1994. SAM’s desire to further serve its community was realized in 2007 with the opening of two stunning new facilities: the nine-acre Olympic Sculpture Park (designed by Weiss/Manfredi Architects)—a “museum without walls,” free and open to all—and the Allied Works Architecture designed 118,000-square-foot expansion of its main, downtown location, including 232,000 square feet of additional space built for future expansion. The Olympic Sculpture Park and SAM’s downtown expansion celebrate their tenth anniversary in 2017.

From a strong foundation of Asian art to noteworthy collections of African and Oceanic art, Northwest Coast Native American art, European and American art, and modern and contemporary art, the strength of SAM’s collection of approximately 25,000 objects lies in its diversity of media, cultures and time periods.