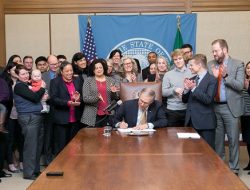 ERW Reports On A Winning Year For LGBTQ Rights... 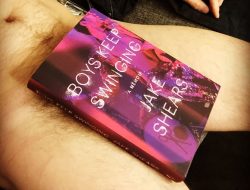 All The Jake Shears News Fit To Print With... Some of the many artists in Intersections: A Celebration of Seattle Performance is a festival of arts representing the entire community and it’s happening March 22-25, 2018 at the Youngstown Cultural Arts Center in Delridge/West Seattle

Variety shows — and especially *shudder* so-called-comedy-focused ones — are a tough act to pull off.  The curators of the Intersections Festival, however, proved it can be done just right.

The Intersections Festival opened last night and will continue through the weekend with six more shows, all of them different, at the Youngstown Cultural Arts Center on Delridge.  The shows are held two per day: 7 pm and 9 pm (last night through Saturday night), and noon and 1:15 pm (Sunday).

The festival may be new, but the skill in curation demonstrates the organizers (principally Jekeva Phillips, Natasha Ransom, and Kinzie Shaw) are anything but novices.  Even before the festival began, a glance through the lineup suggested audiences were in for a rare treat.  Highlights of the full roster include:

As for the opening night’s showcases, the early and late performances (hosted by Davis and Huertas, respectively) each included a similar variety of comedy and other acts, but turned out to be very different shows.  The Early Show was a smart and lively variety show, edgy but not racy, opening with a trio of musicians taking men to task for mansplaining on coping with periods (“An Awkward Situation”) and continuing through seven more acts, with a good mixture of music and comedy/improv, all of it witty and bitingly relevant.

The Late Show signaled quickly that it would be a big shift from the Early, with raunchy comedy and (fascinatingly awkward) improv in the first act, followed by burlesque and drag in the second.  Without feeling disjointed, the comedy set was just the right build-in for the burlesque and drag, warming up the audience for some vulnerable pieces on the economics of life and sex work (Maggie McMuffin) and gender transition and transformation (Jasmine Joshua/Harvey Gent), before closing out with a big, entertaining drag number by Jade Dynasty.

In total, the festival’s lineup across four days will feature some 70 people in 40-some acts, many of them people of color, about half of them queer-identified, and diverse across artistic disciplines and experience levels.

As the name implies, the Intersections Festival focused on inclusivity and intersectionality (how the interplay of different identities — race, sex, gender identity and presentation, sexual orientation, national origin or ethnicity, body type, physical ability, and religion, for example — contributes to our overall being and experience in the world).  The lineup reflected that mission, as one would hope.

But here’s where things get wild.  Unlike the usual of, “Hey, uh, can we find some [insert minority descriptor here] people? Anyone know anyone?” — or, worse (and I swear this has happened, right in front of me, at leading institutions), the popular excuse of, “We can’t, because [insert minority descriptor here] people don’t do [insert generic art form here, that the org professes to specialize in]” — unlike all that mess, the Intersections Festival knew them, found them, brought them.  In other words, not only did organizers know they exist, they knew where to find diverse excellence across many crafts, and put in the time to connect with them and book them.  That is the commitment to artistry and craft — not tokenization — that all organizations should aspire to.

(On that note, the next time you hear a flimsy excuse justifying a stage full of all white improv artists, please show them this piece and ask them to do better.  You can always find another place that will.)

All shows are held in the intimate Thelma Dewitty Theater at Youngstown Cultural Arts Center, on Delridge, just barely into West Seattle.  If you’ve never heard of the Youngstown Center, you’re forgiven — I likely wouldn’t have either but for some prior review dispatches there.  But the building is a neat space, something of an arts community center, hosting a variety of rental shows for different organizations, and serving as home base to Arts Corps, Totem Star, Youth Speaks (“Youth Speaks!” — it’s always followed by the echo), and Twelfth Night Productions, among others, as well as the West Seattle Tool Library.  The building is a former public school and still maintains the look, right down to the principal’s office right in the middle.  The theatre space finally had its sound system upgraded — hooray! — and one can only hope the strange and shaky riser seats will be next.

The Intersections Festival tickets are $12 per showcase online plus fee (or a similar $14 at the door) with two showcases held each night.  However, in an effort to make the event accessible financially for all, they have asked that would-be-attendees who cannot afford admission send them an email rather than staying home, and they will arrange admission.  For intersectionality includes economic class, too — and as the organizers put it, “If we are not accessible to the poor, we are neither radical nor revolutionary.”

We hope the festival will become an annual (or more?) event.  In the meantime, you can visit the festival’s “Lineup” page (https://www.intersectionsfestival.com/lineup/) to learn more about the individual artists, follow however many of them you’d like on social media to your heart’s content, and find out what they’re up to next.