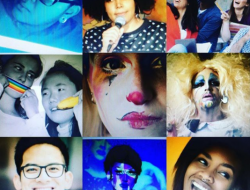 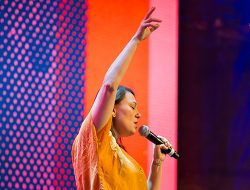 All The Jake Shears News Fit To Print With His New Memoir, B’way Gig and Upcoming Album In a nutshell, it appears Scissor Sisters’ frontman and Seattle area former resident JAKE SHEARS (aka Jason Sellards from ‘back in the day’) is all poised for a big comeback.

Yes. He probably hates that word. But, he has sorta kinda vanished from the scene in the last few years as Scissors Sisters has been on a ‘hiatus’ since 2012 from creating their infectious and, at one time, highly popular brand of contemporary queer pop music and Shears really only doing the odd gig here and there.

2018 has changed all of that as Shears has written/published a memoir, Boys Keep Swinging, which has gotten some attention, as well as making his debut on Broadway by taking on the co-lead role in the long running musical hit, Kinky Boots, a gig he wraps up on April 1st. Then, he’ll finalize work on the release of his first solo album which is coming….later this year. (I just spent 20 minutes looking for info on a release and found NOTHING!)

He’s also playing Birmingham Pride in the UK…really, why doesn’t some clever local promoter bring Jake HERE back to his hometown? I’m sure he’d give us a discount. As for the memoir, you can check it out NOW in area shops or online. Boys Keep Swinging is an unusual memoir in that it’s written by an artist who’s only 39 years old (Yes! Jake Shears turns 40 in October!) and it only covers his life up to the release of Scissor Sisters’ 2nd album Ta-Hah in 2006. In it, he discusses his teen years spent on remote San Juan Island and in Seattle and the subsequent adventures as a rising young go go boy and musician in turn of the century New York City.

Lambda Literay’s William Stockton interviews Shears about the impetus to write the novel and the abrupt ending:

What compelled you to write a memoir at this point in your life?

The book was actually my editor’s idea. He thought it would be great to write a memoir that focused on a specific time, New York City at the millennium. It seemed daunting, but I’m not one to pass up an opportunity for a big challenge. I also felt that if I ended it in 2006, I had enough separation from that time to have some perspective.

Boys Keep Swinging arguably ends prematurely. What made you decide to conclude the book with the release of Ta-Dah?

I never wanted this to be a history of the band. I wanted it to be a history of myself. The book ends with a death of a friend, and the start of our second record, both of which felt like the end of a chapter in certain ways. Once I have enough distance from the rest of it, I think I’ll be happy to continue that story.

You can snag the book at your favorite book shop or via your hometown shopping conglomerate.