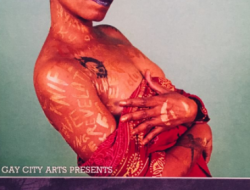 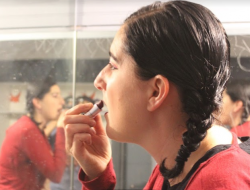 (Editor’s Note: Seattle theater artist and educator RACHEL DELMAR has been in the Big Apple for the last year enjoying what New York City theater has to offer but returns to Seattle. Here’s “7 Things She’ll Miss About NYC Theatre”…and one thing she won’t…) Surprise. NYC is an expensive city. Unless you have the privilege of time to get in [or ‘on line’, as they say here in the big city] line for rush tickets [which are still $25+] at the crack of dawn, you’re [on a good day] spending $30-$75 on your ticket. That’s not including fees.

That being said – there are always a plethora of FREE events, [including The Public’s Summer Shakespeare – that also includes standing in an early morning line. And I would be remiss not to shout out the great artists at Seven Stages Shakespeare Company & their ShakesBEERience, which takes place FREE at the Way Station in Brooklyn.] but if you want to see basically anything, anywhere, you gotta throw down. Even working a job that, in most places, would have financially put me into the upper middle class, I could barely afford to see more than a couple of plays a month.

Accessibility. There has to be a balance between business and the purpose[s] of theatre. When the people whose stories are being told on stage can’t afford to see the show, we have to figure out another way. I don’t know the answer yet. But I promise you, it remains on my to do list. And I can’t wait to tell you when I figure it out. For now, in Seattle, I highly recommend checking out Theatre Puget Sound [TPS] & becoming a member – through them you get access to a lot of discounted tickets, including free rush tickets to Seattle Rep – which doing one time basically pays for your TPS membership. A membership that helps to support TPS, an organization which does everything they can to support local artists and maintain a thriving arts scene in the Pacific Northwest. YOU CAN BE A PART OF IT!

Check it out. And I’ll see you at the theatre…

About the Author: Rachel Delmar

Rachel Delmar has been working to get people to come see theatre since she was 9 years old. She has worked around the country as an actor, director, poet, teaching artist, producer, & marketer. Her first stop, getting her degree & a very expensive crash course in how to make theatre at the University of Southern California. She has just returned to Seattle from a yearlong sojourn in New York City where she spent too much money drinking out of Sippy Cups at the Theatre. Besides having to drive again, she’s excited to be back in the PST to make, see, & support all the art happening around the PNW. As a marketer & writer, Rachel specializes in social media marketing, content creation, & stimulating audience engagement online. Loves include dirty martinis, karaoke, & destroying the patriarchy. She’s also moderately famous on Twitter @RachelDelmar.