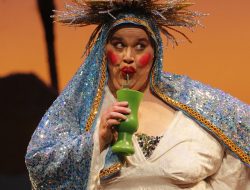 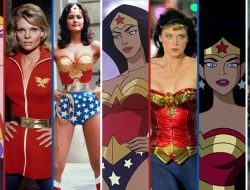 Ironbound is Martyna Majok’s autobiographical-ish take on the lives of immigrant women, in this case a Polish immigrant woman named Darja living in the defunct industrial edges of northern New Jersey and dealing with a life constantly on the edge of poverty and despair. Loosely based on Majok’s own immigrant mother and their lives struggling in America, Ironbound is a time trippin’ look at key moments in Darja’s life and all oddly centered on a bleak bus stop outside the now abandoned factory she worked at after coming to America in the 90s.

The play is centered on the “now” with Darja dealing with her complicated relationship with her current boyfriend Tommy, a rather simple Jersey kinda guy who happens to be a mail man who is just a little bit afraid of Darja’s sharp tongue which he feels after she confronts him about an affair he is having with the woman that Darja now cleans house for. Their seemingly collapsing relationship is the core of Ironbound but not the only story as the Darja/Tommy tale, told in multiple parts, is entwined with two other plots each told in a single scene.

One is with Maks, Darja’s first husband who immigrated with her to the States. Maks wants to be a musician and he wants to  move to Chicago which Darja is seemingly reluctant to do for a number of reasons…including the fact she is pregnant with their child. This scene occurs nearly 20 years prior to the modern scenes with Tommy.

The other scene occurs at a point halfway between the “now” of Tommy and the long ago of Maks. Distraught and at the end of her tether, Darja hides out at the bus stop after a brutal fight with her second husband, (who we never see on stage) and concerned about not only her fate, but that of her now teenaged son. Darja meets another teenager, a boy named Vic, at the bus stop and forges a connection with the youth who has a mysterious back story of his own.

I enjoyed many aspects of Ironbound; all four actors are strong especially Alexandra Tavares in the lead role of Darja, complete with thickly authentic Polish accent. Plus, the moody, dark industrial design elements of the production are very much on point (especially Julia Hayes Welch’s desolate bus stop) as well as Kelly Kitchens’ taut direction are all big assets. But, it has to be said, this play is a lot to endure. It’s darkly depressing, grim and painful as we deal with Darja’s constant struggle to just maintain a life for herself and her son. If you’re in a dark place, it can be a lot to take in. It’s a downer.

This is a play that calls for ANTI-depressants.

That said, Ms Majok’s play is interesting and the main character she created is fascinatingly complicated. Darja is sly, beguiling, charming and passionate. She’s also obstinately stubborn and prone to questionable choices…like stealing from her employer. And, not always likeable…she’s obviously using poor dumb Tommy to achieve her goal of finding her son who is now a drug addicted runaway she’s desperate to find and help. And, I don’t quite get why she refuses to leave the awfulness of her surroundings (she’s had chances, notably with her hunky and seemingly sweet first husband) and what’s with her strange attachment to  hanging out in this dank bus stop. As a metaphor, the dead end bus stop is a bit…heavy handed?

Albeit cheaper to stage…

And, to be honest, the scene with the mysterious teenager is the least believable of all the scenes. Darja and the other two male characters seem like real people but “Vic” the helpful teen never seems like anything other than an unlikely character in a play. (And, not helped by the fact actor Nathan Brockett doesn’t really read as a “teen” anymore…) It’s the only scene that feels overtly false including a weird moment when Darja claims she doesn’t understand the concept of a “diner” meaning a cheap restaurant to get a meal, and specifically in New Jersey/the East Coast, a very specific metal, bullet shaped building frequently open 24 hours. By this point in the play/time line Darja has lived in New Jersey for over a decade…how could she not know what a diner is, even if she’s too poor to eat out? It’s like living in Seattle for over a decade and claiming you don’t understand the concept of teriyaki or pho.

All that said, Ironbound is of interest. In addition to Ms Tavares’ passionate performance of Darja, there’s also the charming work of Arjun Pande as Maks, her Polish first husband and a very funny turn by Roy Stanton as the “Jersey Guy” mailman Tommy who also rocks a very authentic accent of the Newark persuasion. These actors and the design elements and the strong staging make it worth checking out.

BUT, only if you’re emotionally prepared for a lot of darkness. Ironbound ain’t no fun day at Atlantic City eating fried clams and strolling the boardwalk…it’s more like a dark rainy day in Newark eating raw clams while hiding underneath a boardwalk.