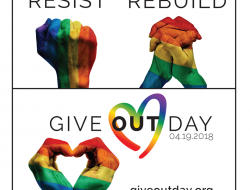 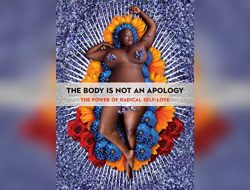 Experience “Radical Self Love” With Sonya Renee Taylor At... Friday night, April 20th, featured a very special queer theatrical event as legendary performance artist TAYLOR MAC brought A 24-Decade History of Popular Music: 1956-1986 (Chapter VII) to downtown Seattle’s Moore Theatre for a mega three hour show that traces American history via song and Taylor Mac’s progressively empowering narrative. A joint presentation between On The Boards (where Mac normally performs) and Seattle Theatre Group the show played to an audience of very appreciative socially progressive fans including many local queer theater artists such as our own CHAD GOLLER-SOJOURNER, the Seattle based writer, activist and solo performer. (I got to sit next to Chad and due to the nature of Taylor Mac’s shows, we had to slow dance with each other, so we’re basically now “going steady” at least within the confines of The Moore Theatre but best of all, I got to meet and get to know Chad.)

But, one audience member did NOT appreciate the progressive nature of Taylor Mac’s work, which utilizes audience participation as part of each show’s narrative. In the case of Chapter VII of A 24-Decade… which begins in 1956, it included the physical segregation of the audience as Taylor Mac forces the white people sitting in the “good” seats in the middle of the theater to vacate those seats to move to the less desirable sides of the house (“suburbia” as Mac calls it) and instructs audience members of color to TAKE those vacated “white” seats…not for the whole show but for about 10 minutes or so. It was to illustrate “White Flight” when white urbanites fled to suburbia in the 1950s/60s  to avoid the desegregation of urban neighborhoods.

I’ll let Chad take up the story, followed by the video he made for his own FB page, “A Colored Sissy’s Guide To Understanding Everything Except Algebra”  (Note that Taylor Mac prefers “judy” as a personal pronoun choice, a tribute to the singer/actress/icon Judy Garland.) Last night at the Taylor Mac show in Seattle during a brilliant, hilarious, and important audience participation piece on white flight, a white woman accused Taylor of saying all white people are racist. She didn’t like his answer and kept talking. (judy) left the stage promising not to return until she was gone. In keeping with Seattle tradition, the next 10 minutes were spent as several audience members held an impromptu teachin’ with this woman (I’m not joking). After that didn’t work the manager tried. By this time my nosey ass has made it down to the front where I was equally pissed and fascinated.

Chad Goller-Sojourner is a Seattle-based writer, solo-performer and recipient of a distinguished Artist Trust/Washington State Arts Commission Performing Arts Fellowship. His work has been funded by the National Endowment for the Arts and featured on NPR. Most recently he was selected as the 2013 Ohio University Glidden Visiting Professor. In 2008 he premiered his inaugural solo show: Sitting in Circles with Rich White Girls: Memoirs of a Bulimic Black Boy, which he continues to tour nationally. In 2016 he debuted a new work: Marching in Gucci: Memoirs of a Well-Dressed AIDS Activist .  www.ridingincarswithblackpeople.com