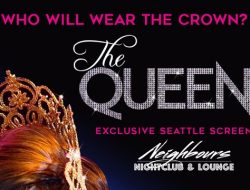 Special Screening Of New Documentary Film “The Queens” At... 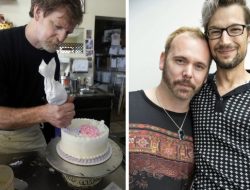 Pride Month Kicks Off With Events ALL Over The Place So. Pride has gone from a Day to a Weekend to a Week and now officially it’s a Month of Pridey fun.

What next? Pride Monsoon Season?

Locally, Seattle LGBTQ Pride kicked off on Friday, June 1 with the Seattle School District raising a Pride flag at the crack of dawn (er, 9ish?) and then Mayor Jenny Durkan and the Seattle LGBTQ Commission got in on the act at Seattle City Hall at 5ish in the afternoon by raising the new Pride Flag with the extra stripes for different QPOC and non-binary folks. The new flag has some people riled up about it (not happy that the new stripes represent specific groups of people instead of the broad ideals the traditional flag represents) and others dee-lighted about the inclusion of neglected/ignored/marginalized members of the community.

(We’ve also seen many people ask: “WHERE can I get this flag?” And, the answer is, from an Etsy shop that makes many different kinds of Pride flags including this new 8 stripe version called the “Philly Pride Flag” since it originated in Philadelphia of all places. The big version being used at Seattle City Hall is a custom job but you can order a smaller sized flag for only $32 at their Etsy shop HERE!)

On Saturday, June 2nd, MORE events rolled out including Burien Pride happening in the seaside Seattle suburb for the 2nd hugely successful year in a row.

Sunday featured even more events with the annual RUN/WALK WITH PRIDE event at Seward Park in Seattle for the more athletically inclined (meaning not me…) Seattle PrideFest has their first big event of Pride Month with their annual “CLEAN SWEEP CAPITOL HILL” event they share with the Capitol Hill Chamber of Commerce another fabulous community event that happens far too early in the day for night owls.

Snohomish County LGBTQ people get in on the Pride with their SNOHOMO PRIDE event happening in Snohomish (the city) at their Willis Tucker Spray Park according to their terrible FB invite with very little useful information on it…. (hint, hint).

The tiny industrial suburb of south Seattle also gets in on the Pride stuff with South Park Pride Picnic which has absolutely nothing to do with Cartman or Mr. Hanky the Christmas Poo….it’s produced by Entre Hermanos and Pride Foundation. More poo: