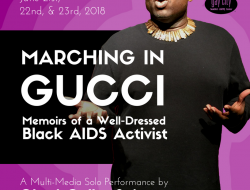 "The Queens" (Trailer #2) from Mark Saxenmeyer on Vimeo.

New film explores the journey taken by transgender drag performers in the competitive world of the pageant system. Well, since SIFF (the Seattle International Film Festival) decided NOT to do their annual “GayLa” film screening and party at this year’s 2018 festival (going on right NOW through June 10th) where they showcase a gay film for the LGBTQ community, you might see THIS film instead since it’s happening around the time that the GayLa was usually held…

It’s THE QUEENS and it’s a new documentary film about drag queen pageants, specifically the famed Miss Continental Pageant, one of the biggest in the country but even MORE specifically it’s about drag queens who are TRANSGENDER and explores the journey taken by trans queens in the very competitive world of the drag pageant system.

The film is on a cross country fund raising tour to help pay for expenses including film festival screenings and it’s coming to Seattle on Thursday, June 7th for a screening/party at NEIGHBOURS NIGHTCLUB on Capitol Hill. It’s only $12 so it’s actually CHEAPER than most movies!

At long last, The Queens is ready for its close-up!

Part Paris is Burning, part RuPaul’s Drag Race and part Miss America, The Queens explores the transgender subculture of competitive female impersonation. Along the way, this feature-length documentary delves into the fascinating history of Chicago’s iconic female illusion show lounge, The Baton (now in its 49th year in the same location), and the club’s legendary offspring, the Miss Continental beauty pageant (an annual competition that has drawn transgender contestants from around the globe since 1980). The entertainers immersed in this glamorous, close-knit community share the highs and lows of their lives as they compete for the coveted crown.

As society grapples with issues of transgender acceptance and understanding, The Queens takes viewers out of the politics and onto the stage with an exclusive look inside the first beauty pageant to ever allow transgender female impersonators to participate. Born out of discrimination, the Miss Continental Pageant is now one of the longest running and most prestigious contests of its kind in the United States, attracting competitors from around the globe.

The Queens humanizes and demystifies this group of often-misunderstood individuals; they’re fiercely determined, strikingly imaginative and possess jaw-dropping talent. The Queens will have you cheering for the creative spirit that lives within us all!

Using the framework of the 38-year-old Miss Continental pageant as its backdrop, The Queens explores this complex and relatively unknown subculture of transgender life. The documentary attempts to help viewers understand why these pageant competitors are so wildly driven and dedicated in their quest for the crown — a title most people have never even heard of, despite Miss Continental’s longevity and prestige within the female impersonation world.

We follow the journeys of several contestants as they diligently plan, prepare and plot their paths to victory. Along the way, we meet several former titleholders, as well as some who have repeatedly competed in the pageant but never left victorious (and are perhaps a bit bitter).

But the documentary focuses on more than just the competition. We delve into the whys and hows and dangers of the physical alterations many competitors have made to their outer bodies (silicone injections, breast implants, facial reconstruction, etc.), their inner bodies (hormone therapies), and their decisions to refrain from following through with gender confirmation surgery. Some do so in order to conform with Miss Continental’s strict (and some say archaic) rules defining what constitutes a female impersonator — rules that determine who is, and isn’t, eligible to compete and perform.

Watch the first three and a half minutes of the film here!

The Queens is making its Seattle premiere with an exclusive screening at Neighbours Nightclub & Lounge on Thursday June 7th! Following the screening, director Mark Saxenmeyer will answer audience questions.

The film is produced by The Reporters Inc., a 501(c)(3) nonprofit journalistic production company based in Minneapolis, Minnesota. The Reporters Inc.’s mission is to encourage and champion social awareness, justice and change through powerful multimedia storytelling: www.thereporters.org
Funds raised from the June 7th screening event will help The Reporters Inc. cover post-production costs (insurance, audio sweetening, film festival fees, etc.) to launch The Queens into widespread distribution. The documentary, released in February, has been screened, so far, in Chicago, Minneapolis, St. Louis and Portland. The Reporters Inc. has (so far) entered the film into 16 film festivals and is awaiting word on acceptance.

And the first reviews are IN!:

“Some people see these performers all dressed up and might dismiss them as frivolous but The Queens also brings fabulous historical context to subjects like violence against trans women, addiction, sex work and HIV/AIDS.”  –Scott Duff/Co-Host of “Out Chicago” on WCPT 820 AM Tiffany T. Hunter is one of the transgender drag performers featured in new documentary THE QUEENS screening at Seattle’s Neighbours Nightclub on June 7th