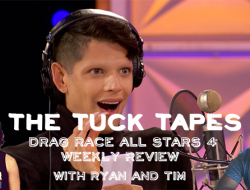 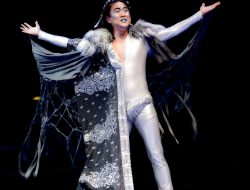 The Village production is an impressive feat of child acting — but, unfortunately, Matilda’s story falls flat, as this musical adaptation strips the charm right out of its source material.

Matilda is a 2010 musical inspired by Roald Dahl’s 1988 children’s book of the same name.  In the book, a very bright five-year-old girl escapes her brutish family (the Wormwoods) and sadistic school principal (Miss Trunchbull, or simply “the Trunchbull”) by teaming up with her wise and sweet teacher (Miss Honey) who also desperately needs an escape.  With this musical adaptation, “inspired by” might be a stretch; “based around some characters and plot points but without Dahl’s brilliant storytelling” would be more accurate.

I’ll tip my hand early to note that Dahl’s original Matilda (and Quentin Blake’s wonderful illustrations) was one of my favorite children’s books, and remains on my short-list of all-time favorites.  That’s a tough act to follow, sure — but since the movie adaptation didn’t screw it up too much, I was excited, rather than trepidatious, to see the musical adaptation.

Sadly, the musical adaptation compared with the book is downright awful.

In Matilda the book, the divide between good and evil is obvious.  The villains — chiefly her father, mother, and headmaster Miss Trunchbull — are so evil, to seethe at them is unavoidable; and the innocence and goodness of Matilda and her teacher are in perfect contrast to them.  When Matilda starts to boil over from their cruelties, you can feel her rage because you’re right there with it; and our repulsion at the villains makes revenge that much more delicious.

The musical version, in contrast, manages to muddy the clearest waters, first by tempering the evil of the villains, then by turning the lead character into something of a self-assured know-it-all.  The parents come across as unpleasant, and occasionally unscrupulous, buffoons; understandable to prefer to avoid, but nothing to stage a mutiny over. The brother, dull and unremarkable in the book, is puzzlingly played as developmentally disabled in this production.  Miss Honey becomes the dull and unremarkable one; where in the book she was a quiet champion for justice, even after decades of abuse by her aunt, and  it was Matilda who awakened her spirit again.

All this could be redeemable if they’d at least get the two central characters right — but it’s not to be.  The Trunchbull, the supposed mega-villain (and a most formidable one in the book), here is impatient, abrasive, bossy, overbearing, large, and unpleasant-looking.  But she’s not evil, exactly, as the story requires — and instead is portrayed more as a hyper-exaggerated stereotype of what women “shouldn’t be,” and is played by a man at that.  And though she’s bursting with muscles (one of the Trunchbull’s key characteristics in the book), here she’s too-easily toppled by a child. It’s a boring run-up to a predictable end. The Trunchbull and her charges. Village Theatre production photo by Mark Kitaoka.

The title character, meanwhile, went from very meek and unassuming in her child-brilliance in the book, to the center of attention and the first to point out her own advanced IQ — which made her hard to root for. When she got back at her parents by pranking them (by putting super glue in her dad’s hat, say), it seemed more bratty and petty than heroic.  Ditto when she led a revolt of her school peers. And both Miss Honey (a key character in the book) and the librarian (Mrs. Phelps, a very minor character in the book) felt like they were written into the musical as little more than props for Matilda. In the original, both were key to Matilda’s development as mentors of sorts — introducing her to ways she could expand her bright and curious mind, rather than as static characters for her to lead around.

Lastly, the singing: thanks to the performed British accents, the songs (none of which were particularly catchy) had a nasal tone and were hard to understand half the time.  They also felt like add-ons, doing minimal work to drive the story — ironic, given that Village’s previous show, a smart new musical called The Noteworthy Life of Howard Barnes (see review here), made it a key plot point that songs in musicals must always drive the journey forward.  With its sluggish pace, it’s no wonder the show clocked in at two hours and 45 minutes in length.

Suffice it to say, Matilda isn’t what I wanted it to be.  How it managed to run on Broadway so long, and to pick up so many awards and nominations, I haven’t a clue.

The high note: an impressive performance from kid actors in big roles

So after all that, where’s the upside?  That would be the kid-friendly, magical world that the production created, with kids at the center and professional actors and design elements all around them.  If you’re looking to show your kids some theatre magic, pick this show.

First, the stage was full of child actors — the director’s note puts it at a whopping 14 actors aged 8-12.  These were not kids playing background or peripheral roles, but center-stage, doing a lot of acting and singing and choreographed routines.  The most obvious of course was the title character, who is on stage nearly the whole show, and for which Holly Reichert and Nava Ruthfield alternate appearances throughout the run.

Second, the quality of the children’s performances was outstanding.  Ruthfield played the lead the night I saw it, and she commanded the role easily.  But it wasn’t just the lead who performed well — throughout, the child acting was far from juvenile.  It was obvious a lot of care went into picking kids across a wide age range who were able to work hard, stay focused, and perform well on their own and with a large ensemble.  It paid off: the kids looked like professionals.

In short: it was another strong production from Village.  It’s just a bummer the core of this show’s content — the characters, dialog, musical numbers, and length — made for a snooze of an adaptation.

But your kids will probably be happy, and hopefully artistically inspired, too.  If they can get through the nearly three-hour runtime, that is. However much you enjoy the musical, be sure to go read the book afterwards. Hot tip: for the grown-ups, children’s books pair well with adult beverages. Photo by R. Barron.

Whether you’re seeing it for yourself or bringing the kids, do yourself a favor and follow it up with Matilda the book.  If you’ve read it long ago, you’ll be pleased to know it keeps its magic in adulthood — Dahl has a timeless way with words and characters, and Blake’s illustrations are just as charming.  You’ll probably finish the whole book in less time than you spent at the show.