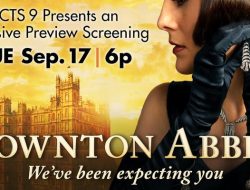 It must be the return of BenDeLaCreme’s campy Halloween spoof Beware the Terror of Gaylord Manor to Seattle’s ACT Theater for the third year in a row. The silly gay bar romp returns with Ms DeLa and her cast of comedians and burly q stars including Major Scales as Count Baron Von Gaylord, the aforementioned Scott Shoemaker as the scene stealing psychic, Leonora, and Mandy Price as a doubtful doctor/Leonora’s hubby.

“Gaylord Manor” is obviously a big crowd pleaser and money maker for ACT…not only was the show invited back for a third year, they’ve upped the number of shows to THIRTY!!! Opening night is October 3rd and runs through November 2nd! Go here to snag those tickets…nights are already selling out.

ACT Pass members, reserve your seat for $15. All ACTPass fees directly support the company of Beware the Terror of Gaylord Manor.