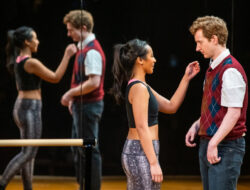 Review: There Will Be No Dirty Jokes In This... 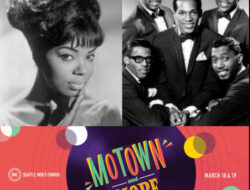 Seattle Men’s Chorus Returns With “Motown and More” This...

It was a tad messy.

I’m talking about the opening night of entertainer “TODRICK HALL’s FEMULINE TOUR” at Seattle’s Moore Theatre this past Saturday night, March 12th. A pretty packed house of Todrick fans (“Toddlers” I believe they are called) came out to support their favorite gay singer/dancer/social media darling after a rather rocky past few weeks that found the 36 year old star in some hot water over his actions while competing on the latest edition of “Celebrity Big Brother” last month. Hall, a super fan of the Big Brother show, played a “hardball” game while in the house that involved trash talking other competitors that rubbed quite a few people the wrong way both in the Big Brother House and to the general public watching the show.

Hall was accused of body shaming a fellow contestant, Shanna Moakler and had a running feud with aging NSYNC boy bander Chris Kirkpatrick. Todrick’s aggressive game play managed to get him into the finals but he lost to martial artist Miesha Tate. After the series ended and faced with an outpouring of online harrassment over his performance, Hall went into a period of radio silence while preparing for his Femuline Tour.

He broke that silence on Saturday night but after some long delays. The show had a start time of 8pm and being a concert, it naturally didn’t start on time but…it stretched out to a wait that almost rivaled Madonna’s notoriously late start times for her last Madame X tour. A rather pathetic opening act did emerge at 8:30 to perform a short set…I never did hear a NAME for the lead singer who was backed by two male dancers but it was strictly B level karaoke at best and low energy at that. It was the kind of entertainment you’d expect in the smallest cabaret room on a rather cheap gay cruise.

It was also during this time that I was attacked by some oaf in the audience. Some middle aged queen kept bopping over to talk to the people sitting immediately in front of me. In order to get closer to them, he came into MY row of seats, which at that point was mostly empty, so he could lean over from behind to chat with them and as he did so, he stepped down HARD on my right foot which made me yell out in pain, “OW! YOU’RE STEPPING ON MY FOOT!!!” which he didn’t much respond to until I glared at him and he muttered a pathetic “sorry”. And, then he kept on chatting with them as he loomed over me and I noticed he DIDN’T have his mask pulled up over his mouth/nose and by this point I had enough of him and barked, “Did you PAY for that seat you’re standing by?” He muttered “no” and then I snapped, “Well, it’s time to move along and pull up your damn mask” and he got all testy to point out that he had paid for all these seats, indicating the row in front of us but he did pull up his mask.

Insert a “Bitch, please…” and eye roll into that conversation and you have it in a nutshell.

So, back to the onstage drama…or lack of it. Another long wait had occurred during this time and then at about 9pm, a trio of “Street Team” promotion people took the stage to do a fun energetic dance routine that got the crowd excited for about 5 minutes. There was also an announcement and an apology for the delays…apparently there were “technical difficulties”. The street team then left the stage and we got another long wait until the main show actually started about 9:30pm.

And, despite the supposed technical issues, Hall has put together a fun, VERY energetic stage show that was very much enjoyed by his audience of loyal fans. It’s all frothy, modern, pop dance music and much of it from his latest album (not surprisingly named Femuline) but Hall knows how to put a show together. He wisely cast a terrific and diverse corps of 16 dancers to back him up and they were really the chief highlight of the show for me. Unlike many stars who will cast a rather homogenous back up team of fit dancers who all blend together in contrast to the star performer, the Femuline dancers represent a broad range of genders, sizes, ethnicities and personalites. For me, not being a specific “Toddler” fan, they were the highlight of the show with their energy and charm.

The numbers were good, but probably more so for the Toddlers familiar with the songs. Hall sang live during the show and the vocals were strong. There were references to various aspects of Hall’s career including his recent stint on the popular music competition show “The Masked Singer” where he wore a bull costume as his alter ego. Several of the dancers wore a similar costume in the second number. It was followed by a “Come to Church” number which featured Hall and some of the dancers in Gucci inspired nun habits.

And, while the Gucci nun costumes were cute, there were some other questionable costuming moments during the show including an overall issue with many of the costumes looking a bit cheap and thrown together at the last minute. During the opening number, I saw pieces of costumes fall off some of the dancers and one of the bigger male dancers had the back of his garment ripped open because a zipper had failed. And, surprisingly, most of Hall’s costumes weren’t particularly flattering on him, including a “Mean Girls” outfit that was really quite ugly and clumsy looking. Wasn’t there someone around who could have piped up to say, “uh, honey, that costume ain’t cute on you…” If not, then Todrick needs to find a new sassy best friend to Tell. Him. The. Truth. When. He. Needs. To. Hear. It.

But, the Gucci nuns were cute. Even though from a distance, they read more “Louis Vuitton” than Gucci.

As for the other technical issues, it really wasn’t that big of a deal that the backing screens weren’t functioning. Really, the production team should have cut their losses an hour earlier and just decided to start the show instead of fiddling about for so long hoping things would magically start working.

But, they probably sold more t-shirts while the audience waited for an hour and a half…

The show is two acts and…I didn’t stay for the second act. By the time the first act ended at about 10:30, I was tired and ready to go home and have some dinner.

Oh, and Todrick DID address his recent woes towards the end of the first act with a sad mea culpa about “mistakes I made” and the cruelty of social media for not allowing him to make mistakes and learn from them and then he sang a love song he wrote to himself and it was all quite sad and “please feel sorry for me” but the audience really loved it and the show stopped for a moment while they gave him the audience love/blow job he so badly needed and…

I knew it was time to go home and make me a boloney sandwich.

Who is this show for?

For tickets to the tour, go to: https://www.todrickhall.com/my-tours