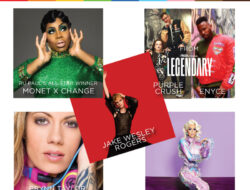 So, we’re especially super excited about SPACE 50, the brand spanking new dance extravaganza from the fine folks who have produced the fantastic Buttcracker shows during the Xmas Holidays over the last few years. It’s ALL about outer space, baby, and it’s a fun, arty night full of dance pieces, music, and film and a must see event for fans of Re-bar style alternative performing arts!

It’s only playing this coming weekend only, Thursday through Sunday and you can snag tickets at https://www.strangertickets.com/events/118575489/space-50-an-evening-of-contemporary-dance-live-music-and-film-april-28-29-30-and-may-1-2022

More from the press release!

Earthlings, set your moon clocks now and countdown to lift-off for Space 50, a new performance comingThursday, April 28th – Sunday, May 1st. Playing at the Erickson Theater in Seattle, the variety show draws from our human curiosity about outer space, as represented in pop culture, mythology, science, and more. It’s an evening of contemporary dance—plus music and film—and produced by the same artists behind the Buttcracker.

From 2015–2019, Buttcracker brought hundreds of audience members the moves of modern dance with the catharsis of a rock concert. Playing to sold-out shows, the beloved holiday tradition featured a multi-generational cast of professional dancers. Now, two of Buttcracker‘s producers Diana Cardiff and Sara Jinks—along with many Buttcracker alumni—are coming together to create something new: Space 50.

Cardiff will revamp her piece Calling Occupants of Interplanetary Craft, “a delightfully humorous” (SeattleDances) work in which the performer dons a tinfoil helmet and brandishes a lightsaber. Cardiff’s co-producer, Sara Jinks will collaborate with the band Academé to create MVEMJSUN(P), a multimedia work with an indie rock feel; the dance film explores Pluto’s tragic downgrade in status and other P.I.P (Planet Identity Politics).

In addition to a love of aliens, planets, rocket ships, and sci-fi, Diana Cardiff was inspired to create Space 50 by her late father. Ed Cardiff: “It is through his eyes and mind that I first got my true appreciation of the beauty of science and the universe.”

Space 50 will be presented with the most up-to-date COVID-19 health and safety guidelines. Proof of vaccination (or negative COVID-19 PCR test taken within 48 hours of the performance) and masks (N95 or KN95) are required for all ages, including children. Masks are required to be worn at all times, except when eating or drinking. The Space 50 team will routinely update our COVID-19 info for all customer FAQs and policies.