You’re wondering: what the fuck is this? It’s your weekly live music roundup. Strangeways has recruited me to slap together this column, which will drop every Monday and feature something to do for pretty much every day of the week. I’ve gigging with my current band, Buffalo Stagecoach, and other projects for a long time and have semi-functioning earholes, so I’m highly qualified.

I’ll also be reviewing the odd show, putting together features on the nightlife and music industries, and profiling the shining stars of Seattle music. Mostly, though, I’ll just do my best to write up the same exact people as The Stranger.

Spontaneous Rex is from the 70s. They’re not, really—some of them just got out of Cornish a few years ago—but their sound evokes fusion acts like John McLaughlan, Mahavishnu Orchestra, and Headhunters-era Herbie Hancock, with splashes of noise rock feedback and ambient electronics thrown in. Like those esteemed (and sometimes over the top) acts, Spontaneous Rex have serious chops and can go from moody to shred in less than six seconds. Their unorthodox, contemplative pieces and SeaMonster’s living room setup could—with the assistance of psychedelics or divine intervention—help you figure out why Pete Carroll didn’t just give the damn ball to Marshawn.

Somehow, the unremarkable breeder meatmarket Nectar keeps booking legends. Junior Reid is a legend of 80s reggae and dub. Reid is famous for his work with Black Uhuru and for his own solo hits, like the 1989 solidarity anthem “One Blood.” These days, Reid is doing solid work with hiphop stars like Snoop and RZA. If you drink enough of Nectar’s $7.00 drafts, maybe you can figure out why none of the well groomed bros present dropped twenty bucks for cover and isn’t paying attention.

9th Wonder is best known for his work as a member of Little Brother, an indie hiphop crew from his hometown of Durham, NC. Little Brother was controversial among heads for their sonic conservatism and criticism of major label rap, a line of thinking reminiscent of the Marsalis brothers’ views on evolution in jazz. So it was surprising at the time when 9th Wonder started working the likes of Jay Z, Chris Brown, and—seriously? Asher Roth?? The beats are still built off old-school style R&B samples. It may not be original, but it damn sure grooves.

If you saw anyone dancing in this city at a live musical performance—which, in Seattle, is as rare as a unicorn sighting—they’d be dancing to Gazebos. Gazebos put out sly, sardonic meditations on love and city livin’ over riffs reminiscent of Wire, Gang of Four, or Blondie. Plus surf beats and doo-wop harmonies. If that can’t make you dance, nothing can.

Yes, you should go listen to free jazz and ambient music in a chapel in Wallingford on Saturday night. The annual Improvised Music Festival (which starts Thursday and ends Saturday) is a showcase for music that is truly unique in a space unlike any other in town. You may not know what you’re feeling when you walk out, but you’re going to feel more than you would if you saw the Maldives at Neumos again. 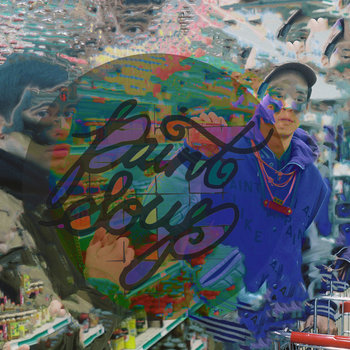 Grape God named himself after a strain of sativa-heavy MJ. Like you might expect, his flow has two settings. He might be energetic and loopy or sometimes slow and drymouthed (it depends on the strain, I guess). He raps about stickups, Face/Off style plastic surgery, and fish sauce over: frenetic breaks, 808 loops and spacey samples seemingly lifted from PBS nature documentaries. He and the rest of his PDX crew, Renaissance Coalition, are a good fit for a bill featuring prolific local production hero OC Notes, who puts together super-melodic jams with sonics from a Mario Bros. game—and recently got into hardcore and punk.