Home #Theater and Stage, Arts & Entertainment, StageReview: An Anarchist To Remember at Strawshop

Review: An Anarchist To Remember at Strawshop It’s all in the timing, isn’t it? Or, maybe it’s just the fact that Dario Fo’s 1970 play, “Accidental Death of an Anarchist” is a timeless piece of theater. Regardless, this 42 year old farce is still not so shockingly relevant for 21st century audiences currently reacting to very recent news stories about political protests and alleged police excesses. Fo originally wrote “Anarchist” after the suspicious death of an accused anarchist/suspected bomber in the custody of Milan police who either fell, jump or was pushed to his death from the fourth floor of police headquarters. “Anarchist” picks up the pieces of that mystery a week after the incident as a character known as “The Maniac” infiltrates the police department and soon puts the policemen involved with the original incident on trial for their crimes. Black comedy and Three Stooges style physical hi-jinks ensue!

The Strawshop’s current revival of “Anarchist” is a remount of their hugely praised 2005 production which was also staged by actor/director Gabriel Baron, designed by Strawshop artistic director/founder Greg Carter and starred two of this iteration’s actors, MJ Sieber as the Superintendent and Rhonda J. Soikowski as the reporter Feletti, roles they repeat here. I didn’t see the original so I can’t compare the two, but judging by this successful staging, it must have been pretty damn terrific. Strawshop’s current “Accidental Death of an Anarchist” is timely, riveting and expertly staged farce with strong performances and outstanding design elements. Fo’s acidic commentary on all levels of societal corruption, from law enforcement to the political to the effects of the mainstream media on both, is brilliantly handled by cast and crew. The basic script of Fo’s work is honored here but  enhanced by author sanctioned ad-libs that reflect both the current times and the locality of the production, (see if you can find them all! My favorite: a throw away remark about a certain new play about drag queens and Helen Keller…) I know it’s finally summer in Seattle, but this production is one that serious theater lovers need to see…you can dump the outdoor patio of your favorite bar for two hours to check this out.

Gabriel Baron won numerous accolades for his direction of the previous production of  “Anarchist” including a Genius Award from The Stranger and while I don’t know if the staging for this production has been changed from the original, it’s still impressive on its own merits with very carefully composed and choreographed movements between the characters including some intricately staged bits of physical business, pratfalls and fight scenes. “Anarchist” is a busy show, with a lot to keep track of and it’s imperative that it MOVE briskly from one moment to the next and Mr. Baron keeps the show on a brisk pace while maintaining the integrity of the text and the power and emotionality of the words. He also has a keen eye for staging small, throwaway bits of business that may or may not be noticed by all members of the audience but add to the texture and complexity of the play. Mr. Baron is also an actor, and while not all actors make good directors, his eye for these small moments and generosity in giving every actor on stage things to fill in every corner of the picture being created, illustrates the strengths that an actor/director can bring to a production.

“Anarchist” is also blessed with a gifted design team. Greg Carter basically reprises his set design from the previous production, but the design is so strong and graphic, that it bears repeating. The wall of filing cabinets that dominates the set and the general amber toned seediness of the office set very deliberately and very deliciously replicates our view of the 1970’s. That tone is also created with the moody and cinematic lighting of Reed Nakayama, apparently very deliberately paying homage to the great film cinematographer, Vittorio Storaro with his use of color and hue to create mood.

The Seventies are also faithfully recreated with the fantastic costumes of Ron Erickson. Awards for costuming tend to go to “period” pieces involving hoop skirts, crinolines and bustles while brilliantly sophisticated more contemporary looks get ignored as nothing more than shopping excursions at your local version of Red Light, but Mr. Erickson’s smart design choices involving bold fabrics, patterns, cuts and silhouettes are all very deliberate and all very spot on. The same could be said for Evan Mosher’s sound design that also cleverly uses some terrific Seventies era, Italian mod music as a soundtrack. The groovy, funky, gritty feel of the period is very well served by all the design elements of this production.

The six actors in “Anarchist” are a brilliant ensemble headed by Ryan Higgins as “The Maniac” a “Catch Me If You Can” style nut/con artist in trouble with the law for his various impersonations of real people. The Maniac yearns to add “Judge” to his collection of aliases and gleefully dons one of his many wigs to persecute/prosecute the cops responsible for the death of the original anarchist. It’s a big, challenging role as the character dons numerous disguises, attitudes and personas to pull off his charade and delivered at a bullet train pace. Mr. Higgins has impressed us before; in fact it was his work in Balagan’s “Trout Stanley” over two years ago that alerted us to the huge potential for this actor, and he really delivers the goods in “Anarchist” as he slyly and manically drives the play to its conclusion. The toothy boyish charms of the actor and his strong sense of the physicality of the role are instrumental to his success in the part. It’s great to see Mr. Higgins given this opportunity as an actor and equally terrific to see that he’s up to the challenge.

Mr. Higgins’ “Maniac” is the ringmaster clown in charge of the play and its proceedings and he excels, but the quartet of actors as his indicted opponents are equally up to the challenge and their ensemble work is superb. Headed by MJ Sieber who brilliantly and viciously recreates his role from the 2005 production as the corrupt Superintendent in charge during the “accidental death” , the quartet of cop/clowns are both hilariously buffoonish tools of the play and some scary reminders of real life police excess. Mr. Sieber always has plenty to bring to the acting table and his bellowing portrayal of a bureaucratic but cowardly bully is right on the mark, (with a throwaway coke joke one of its highlights.) Tim Hyland as his rather dimwitted but equally vicious underling Pissani is equal parts boob and bastard and equally committed to creating a fully realized character that combines the comedic with the menacing. (And, while rocking an awesome pair of boots…) Both actor’s performances are thuggishly endearing.

Galen Joseph Osier added to his long list of terrific performances at the Strawshop with his petulant and pedantic low on the rung civil servant Bertozzo. The character is always stewing and simmering over any and all slights and Mr. Osier does a great job of creating this frequently battered and vaguely Inspector Clouseau-ish character and all the while wearing the most awesome Seventies shirt in the history of awesome Seventies shirts! He’s well matched with the sidekick/doofus charms of Jason Harber as two different look-alike beat cops. Mr. Harber’s expert comedic timing combined with rubber faced looks and some major skills as a physical comedian allow him to make his role(s) stand out to the point where he almost threatens to steal the show on more than one occasion.

Rhonda J. Soikowski has the rather thankless role as the reporter Feletti, the “straight” woman to the comedic hijinks of the rest of the cast and while it’s not a funny role, it is a necessary one, to ground the insanity of the rest of the production and the actress does a admirable job of making the character real and interesting. (Parenthetical Fashion Squee # 3: While wearing an incredibly cute early Seventies mini-skirt outfit!) It’s a cool dry performance that blends nicely with the heat of the rest of the characters and cast. There are two endings to “Accidental Death of an Anarchist” and the fate of Feletti is imperiled in one of them and Ms Soikowski’s performance makes sure you care enough to be concerned for that fate.

As for the fate of Dario Fo’s play, I think it’ll be around for a very long time…certain works of great art endure because their messages resonate for a very long time and whether you agree with those messages or not, they still endure to be discussed.  As for Strawshop’s current production,”Accidental Death of an Anarchist” is a dark but funny show that’s smartly staged, designed and performed and highly recommended. And, it doesn’t depend on where you fall on the political spectrum; if you appreciate invigorating and vibrant theater, you need to check it out. 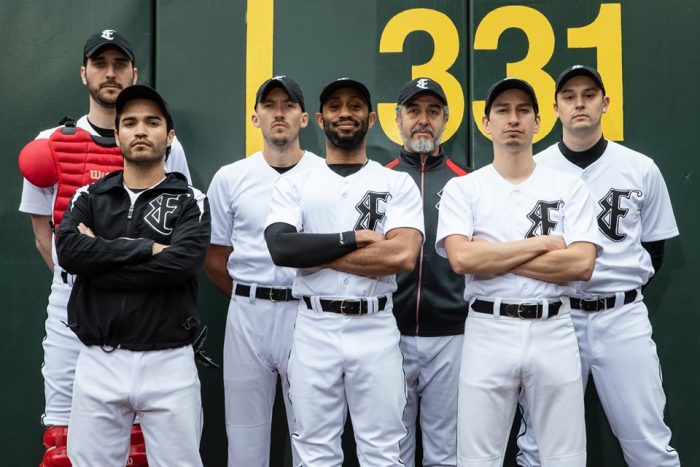 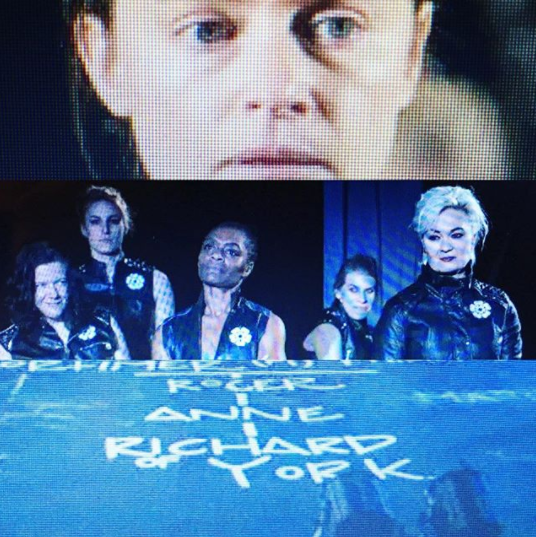 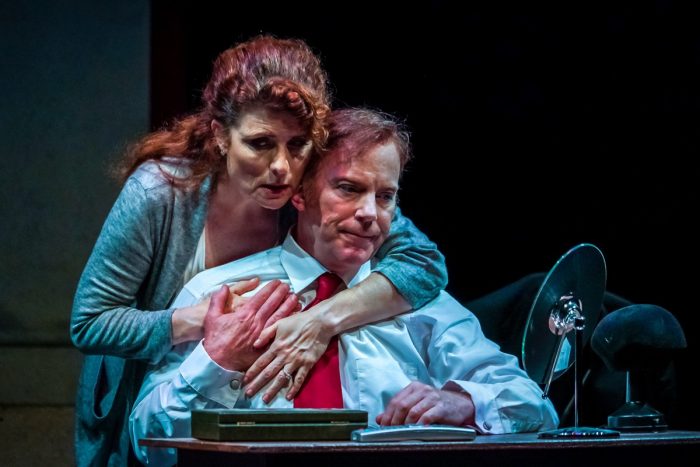 ...
Previous: Anarchists and Homo Eating Cannibals On Local Stages
Next: You’re Registered To Vote, Right? Today is the LAST Day!