Unite Against The Far Right’s War on Women and... 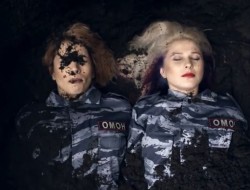 LGBTQ Allyship at a labor rally/protest at the Seattle Space Needle earlier this year. The group plans another protest on Sunday, June 30, 2013 at 3pm. Photo: LGBTQ Allyship

LGBTQ Allyship, the Seattle advocacy group fighting for social and economic justice for the queer community, is planning a protest rally to take place at the Space Needle on Pride Sunday, June 30, 2013 at 3pm. The group is protesting the Space Needle Corporation’s lack of a contract and benefits for its employees and the Space Needle’s apparent decision to not fly the Pride Flag over Pride Weekend this year. The Space Needle, a privately held company who owns the beloved Seattle landmark, leases the land from the city. They have flown the flag in previous years, but have refused to fly the flag for every Pride event. Here’s the “call to bear picket signs” from Allyship’s Executive Director Debbie Carlsen:

This is an amazing time in the LGBTQ community!Victories such as DOMA, Prop 8 and the stoppage of imposing restrictions on abortion services in Texas, which would have shut down abortion clinics, by the nation’s new shero, Texas Senator Wendy Davis are all reasons to celebrate at Pride this weekend.

But there is still work to do! The Voting Rights Act was gutted, the fight for comprehensive immigration reform continues and economic injustice prevails at the Space Needle.

Join us at ‘Protest At Pride’ to support LGBTQ and immigrant economic justice in the tourism and restaurant industries!

Rally at 3pm, location: Space Needle (on the side near the Monorail)

Reasons to support economic equity at the Space Needle:

We ask the Space Needle, a corporation that caters to the LGBTQ community, to fly the Rainbow flag for Pride and set an example in the hospitality and tourism industry by settling a fair contract that includes living wages, access to affordable health care and job security.

In return your organization will be acknowledged in promotional materials and during the demonstration as an ally to LGBTQ economic justice!

Out of town for Pride? You can still support LGBTQ Economic Justice at the Space Needle and in the tourism industry.

Click here to have your voice heard for justice!

Some people will support this protest while others will find it repugnant, but we should point out that Gay Pride itself, is a celebration of the original Stonewall Riots of 1969 and the founding of the modern gay rights movement…Pride IS about politics and protest and advocacy for change.

We’ll also have to point out that the Space Needle IS a privately owned company…they aren’t under any obligation to fly ANY flag at any time. In theory, it’s not any different than trying to bully American Apparel or Kwik E Mart into flying the rainbow flag, or your next door neighbor. It would be NICE if they did, but they’re not obligated to do so. (Though, we wish they would..)

As for the labor issues at the Needle…we always support fair treatment for labor. Working for a tourist trap for low money, few benefits and little job security cannot be an easy row to hoe… Hopefully, management and labor can come to fair and equitable terms.