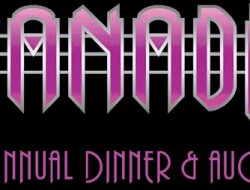 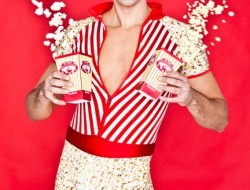 Kirsten deLohr Helland as “Siren” in the world premiere of a new work by Justin Huertas. “Lizard Boy” at Seattle Repertory Theatre opens for previews March 27 and runs through May 2, 2015. Photo: Andry Laurence.

She’s also “playing piano, guitar, ukulele, glockenspiel, kazoo, melodica. Those are some of the instruments I play (in the production),” she reports. “I definitely wouldn’t called myself a guitarist or a pianist, but I feel 100% more confident today playing any instrument in the show than I did three years ago or even four weeks.”

Kirsten is taking a lot of joy in this musical for many reasons. She’s best friends with Justin Huertas, the writer/composer, and has become “obsessed with (new musicals). Being a part of a production in its baby years is such a thrilling experience. Getting people excited about theater that is just now coming is so important to our community. We can’t do Oklahoma forever.”

Kirsten is a home-grown gal, growing up in Gig Harbor. She says, “My mom raised me watching musicals with Judy Garland and The Music Man. I grew up in a musical household. Dad would listen to German opera. My mom has always been 120% supportive of my dreams and she was very good because she said I couldn’t do theater outside of school until I was 16 because school was very important.”

Once Kirsten got to do high school musicals, she had so much natural talent that she was nominated twice for The 5th Avenue’s High School Musicals awards. She was nominated in 2004 for playing Ms. Adelaide in Guys and Dolls and in 2006 for playing Winifred in Once Upon a Mattress. That meant that she got to perform in a presentation on the 5th Ave stage! She thought those were pretty heady experiences!

Kirsten says, “Once I graduated high school, I thought I wanted to do psychology. A year into college (at Pacific Lutheran University), I realized I wanted to do theater more than anything else. It makes me come alive in the morning.”

Justin also went to PLU. Kirsten remembers, “He was a year ahead of me. We both auditioned for a musical revue at the college and we were at a dance audition and he turned to me and asked if I was, ‘that girl who sang “Shy” (from Once Upon A Mattress) at the 5th Avenue High School Musical awards last year’ and it was such a specific question (I said ‘yes’). We’ve been best friends and inseparable ever since.”

Kirsten tells the story of how Justin decided she would play instruments. “My senior year (at PLU), we did Company and Justin was either assistant director or music director for that, but he had graduated. He came in and said, ‘We’re going to do the version of Company where everyone plays their own instruments (like they did on Broadway).’ ‘I don’t play any instrument. Do you want me to play the cymbal?’ I say to him. ‘No, you’re going to play the flute.’ I just laughed and laughed because I didn’t think it was possible.

“I was not about to fail, so darn it, I learned how to play the flute. The goal was not to be a flutist, but to learn the music for the show. I accomplished that goal. That started years of Justin saying, ‘You can play the ukulele.’ and I’ll say, ‘No I can’t.’ and Justin handing me a ukulele and me learning the ukulele because Justin wants me to learn it. Or the guitar. Or the piano.

Justin was invited to develop a script by the (late) artistic director, Jerry Manning, several years ago. Kirsten says, “When Justin called and told me that the Seattle Rep was commissioning him to write a piece, I thought, ‘It’s about time.’ That somebody saw the incredible talent he has and is giving him a chance to show everyone. He so deserves this.”

Once Justin decided the piece was not a one-man show, and came up with the idea of a boy with lizard skin, and it became a kind of superhero/comic book take on feeling different and coping with it, Kirsten and Bill Williams were folded into the development process. Justin decided that all three of them (Justin also performs in the show) would play all the music, themselves.

Kirsten says, “It’s been a little over two years. It’s been amazing watching him grow with the piece as an artist and writer and musician. It’s been so heartwarming. Justin, thru the entire process, has been 100% a collaborator and open to discussion and ideas and experiments. Because I am part of the project, it’s been endless conversations over the last two years.” “Lizard Boy” at Seattle Repertory Theatre opens for previews March 27 and runs through May 2, 2015. It stars, from left to right, William A. Williams, Justin Huertas and Kirsten deLohr Helland.   Photo: Andry Laurence.

Kirsten’s role is Siren. She doesn’t want to give away who or what Siren is, but says, “Siren knows Trevor (Lizard Boy) from her past, their childhood, and she has a clear mission in her life and will do anything and everything to make sure that she is successful.

“In the show, we see how Trevor is important to her plans, but he creates a bit of an obstacle for her. Siren definitely lives deeper into a comic book world than anyone in the show, so you can expect magical elements to her, as you would in a comic book. Her name is because one of the powers she has is the ability to sing with a (magical) power in her voice, directly derived from the Greek myth.

“Because I have been Siren from the beginning, Justin’s allowed me a lot of input in how she behaves. It’s a dream come true to have someone write a role for you. That never happens.”

Kirsten describes another aspect of the music that would be challenging for any non-professional musician: there’s no sheet music! Justin composes and brings in lyrics and sings the melody to them and they begin figuring out harmonies and instrumentation!

She says, “I love it. We’re creating the orchestrations together. We have to memorize at the same time in the moment.

“We never recorded anything until RJ Tancioco (music supervisor) came in and asked for recordings. We don’t need them because we already know the songs. He came in when all of the music had essentially been finished. With completely new eyes and ears, he could say, ‘That is awesome, but what if we add this counterpart here? What about a tempo change here?’ We are so connected that we no longer have outside perspective. Even Brandon (Ivie, the director) is too connected to the show. So RJ has added amazing things to our score. We’re so grateful to have him there.”

Kirsten now has a passel of shows and stages under her belt starting with The Yellow Wood with Brandon Ivie in 2010, to Babe in The Pajama Game at Seattle Musical Theatre (2011), Ilse in Spring Awakening, and Avenue Q at Balagan (2012), Oklahoma, Rent, Elf and The Pirates of Penzance at The 5th Avenue, Trails, Les Miserables, and The Tutor at Village Theatre, and Dogfight at ArtsWest. She also had a featured role in the locally-produced film, Laggies!

So, what does the future look like for her? Kirsten says, “I think film is awesome and if a really cool project came my way I would do it. But films are few and far between in Seattle. We would love for film to happen in Washington all the time, but if I wanted to pursue film I’d have to leave and I really don’t want to.

“In my immediate future, I have Grease at the 5th Avenue this summer. I have found a passion for new work and I’ve been fortunate in being able to participate in workshops and labs for shows that are being written.
As much new work as I can be involved in, I look forward to. (Note: she’s participated in several Festivals of New Musicals at Village Theatre.)

Front row seats to every performance are only $5 each. Tickets are available one hour prior to each performance at the Seattle Rep Box Office (in person only). Tickets are subject to availability and may be purchased in cash only.