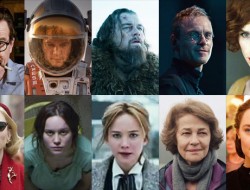 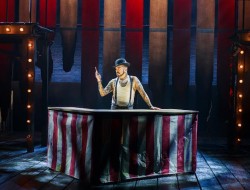 Mya Taylor makes history as the first trans actor to win a major film award for her work in the film, “Tangerine” as she takes the Supporting Actress award at the 2015 Independent Spirit Awards.

Transgender actor MYA TAYLOR became the first trans actor to win a Spirit Award for her work as a supporting actor in the drama “Tangerine”. The popular film had several screenings in Seattle last year and received considerable press attention for the fact the film was shot on an iPhone by director Sean Baker and used an app for the iPhone created by a local Seattle company.

“I came from almost nothing,” a beaming Taylor said from the stage following a standing ovation. “My life did a total 360.”

Taylor was the only Spirit Award winner from the film. Her co-star and fellow trans actor Kitana Kiki Rodriguez was nominated as Female Lead but lost to Brie Larson for her work in the film, “Room”. Trans actor Harmony Santana was the first trans nominated actor for a Spirit Award for Best Supporting Actress in 2011 for her role in “Gun Hill Road”. Mel Eslyn is an independent film producer who splits her time between Seattle and Los Angeles. She produced the 2014 Sundance Film Festival hit The One I Love, directed by Charlie McDowell and starring Elisabeth Moss, Mark Duplass and Ted Danson (Radius/TWC theatrical release August 2014). At the 2015 SXSW Film Festival Mel premiered two features, Ross Partridge’s Lamb (The Orchard) and Todd Rohal’s Uncle Kent 2 (Factory 25), both in theaters early 2016. Her other features include Improvement Club, Your Sister’s Sister,Treatment, and Touchy Feely. Mel is currently in post on her latest features The Intervention (d. Clea DuVall), Dreamland (d. Robert Schwartzman) and Lane 1974 (d. SJ Chiro), the Seattle-based web series Rocketmen (d. Web Crowell), and is currently in development on a slate of films for Duplass Brothers Productions.

Congrats to Mel and bravo for Seattle filmmaking…even, the mumblecore-y kind!

A Pigeon Sat on a Branch Reflecting on Existence

Embrace of the Serpent
Girlhood
Mustang
Son of Saul  — WINNER

Advantageous
Christmas, Again
Heaven Knows What
Krisha — WINNER
Out of My Hand

Kiehl’s Someone to Watch Award