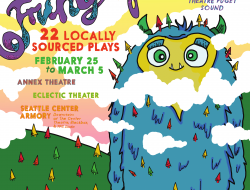 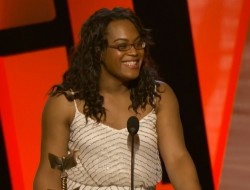 Yes, yes…we know. It’s a disgrace that no people of color were nominated for Academy Awards this year.

Of course, the problem ISN’T the Academy Awards…the problem is the film industry not creating strong films utilizing the talents of women and people of color in ALL categories, not just actors. (Actors are NOT the center of the universe, though they think they are…) “White Oscars” are just a symptom, not the disease.

That said, we know “Oscar Mania” is a different kind of virus had by many folks we know. (We used to have it but in the last 10 years, we just stopped caring about it. Suspect it was probably that fucking awful, piece of shit “Crash” winning the Oscar over “Brokeback Mountain” that triggered it. Which has nothing to do with wanting the “gay” film to win but the fact that “Crash” is just a terrible, trite movie that was badly written, directed and acted…but I digress, as usual.)

There are MANY Oscar watching options for Sunday evening’s live telecast on ABC…we know Purr and Poco Wine Bar on Capitol Hill are having Oscar parties, as is OutWest in West Seattle and we’re assuming they’re all free.

But, if you want more glam and you’re willing to spend a buck or two AND help out two local queer non-profit organizations, then head to Gay City Health Project/Three Dollar Bill Cinema’s 11th annual Oscar Party. Once again, they’re at the Seattle Cinerama and the fun kicks off at 4pm. Online ticket purchases end at NOON on Sunday but you can also grab tickets at the Cinerama Box Office on the Lenora Street entrance side beginning at 4pm. Will call ticket holders will enter at the 4th Avenue side entrance. Join the party at the amazing Seattle Cinerama, and enjoy the Academy Awards broadcast on their giant screen in their well appointed theater. Everyone will enjoy a glamorous Hollywood experience, with savory hors d’oeuvres, no-host bar, Oscar Ballot contest with door prize entries, and, of course, the opportunity to participate in our fabulous Oscar raffle.

Described as TransFabulous and Femtastic, The Lady B is a visceral story-teller, performance artist, community organizer, activist, Twerkshop facilitator, and graduate of Middlebury College. She investigates how politics are projected onto and performed through the physical body through the lenses of race, sexuality, orientation, gender, and ability – responding through the performance mediums of burlesque, original choreography, Drag, and the spoken word.

Despite the fact we think “Hambone King of the World” Leonardo DiCaprio is finally gonna win the Oscar he’s been so desperately chasing for the last 15 years, it should be a fun evening…and, we’re guessing that Oscar host Chris Rock will have a tart thing or two to say about “Honky Oscar Gate 2016”.

And, to refresh your memory, the Best Picture nominees are: