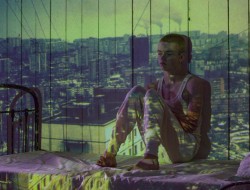 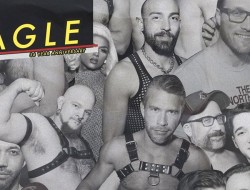 Bellevue Washington Police Officer SETH TYLER is a contestant of Season 29 of The Amazing Race on CBS.

He’s a hubba hubba hunk of burning love…and, he’s on Season 29 of the very popular/mega Emmy Award winning competitive travel show on CBS, THE AMAZING RACE. He’s also familiar to many folks in the Seattle area. You might recognize SETH TYLER for his appearances on local television news programs because he’s the face of the Bellevue Washington Police Department as their Public Information Officer…when crimes happen in Bellevue and journalists need information, they contact Seth Tyler.

But, Seth Tyler is also the LGBTQ liaison for the Bellevue Police Department (as well as a familiar face at Seattle’s Purr Cocktail Lounge on the weekend…) The handsome 37 year old police officer refers to his boyfriend in this promotional video released by The Amazing Race  where he discusses his love for trains and why he wanted to appear on TAR. He also says in this interview with KIRO TV’s Alison Grande, that the experience is changing his life:

“It’s exciting but it also makes me a little nervous because I think I do a pretty good job of separating my work life from my personal life and this show has just thrown that all out the window….it’s all gonna be out on the table!”

We know we’ll cheer on Seth for Season 29 of The Amazing Race which has a big twist this year as individuals will be assigned partners for the first time in the history of the show. In previous seasons, teams applied to be on the show and competed together. In his interview, Seth remarks he submitted his application with his brother (a fire fighter!), but only Seth was chosen. During the first episode, which premieres Thursday March 30th on CBS, Seth will compete to be paired with an unknown partner. (We’ve heard rumors he’s paired with a woman…but that’s all the dope we have. We don’t know how he did in the show. Honest!)

We’ll check it out…Seth is adorable. Seth Tyler, Seattle on Season 29 of The Amazing Race.