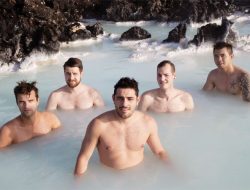 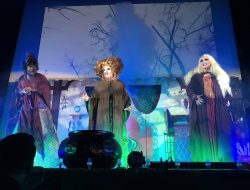 Something Different AND Great: “Deafies in Drag Show” At Broadway Performance Hall YouTube stars SELENA MINOGUE and CASAVINA are DEAFIES IN DRAG and coming to Capitol Hill’s Broadway Performance Hall this Oct 7th! Image from their video “The Tea”

Here’s a terrific different kind of show reaching out to a vastly under served audience: the Deaf community.

The DEAFIES IN DRAG SHOW is happening this Saturday, October 7th at Seattle Central College’s Broadway Performance Hall at 1625 Broadway, corner of Pine, with MULTIPLE seating options depending on whether or not you understand ASL (American Sign Language). The first show will be entirely in sign language and it starts at 5pm. The second show will start at 8pm and be voice interpreted for hearing audiences.  A VIP reception follows at 10pm.

Deafies in Drag are a gay, deaf, comedy drag duo consisting of CASAVINA and SELENA MINOGUE. Casavina is named after Amy Winehouse (Casa is Spanish for house; vina/vino is Spanish for wine) and Selena Minogue is named for Mexican pop star Selena and Australian pop star Kylie Minogue. The pair, actually Jimmy and Alvaro, met in 2010 while attending Gallaudet University in Washington D.C. They became friends and started dating and a mutual love of RuPaul’s Drag Race and a desire to perform themselves led to the creation of Casavina and Selena. The pair became popular on YouTube and social media with their drag videos featuring tutorials on drag and comedy sketches, many dealing with some of the problems deaf people face when dealing with the hearing world including bad ASL interpreters and encounters with clueless waiters and retail clerks.  The videos and now their live stage shows are their way of incorporating queer humor into deaf culture.

And, just being great entertainment for queer/non queer and deaf/hearing audiences.

Snag tickets here and more on the show:

Join Deafies in Drag Queens sensations Casavina and Selena Minogue for the World Tour of their Comedy Spectacular at Broadway Performance Hall in Seattle, Washington US! Kick off October 7th, 2017 with a night of Deafies in Drag Queens Shenanigans that’ll make for a night to remember! Featuring HILARIOUS Performances, Improv, Stand-up and Audience Games. NOTHING from the past is off limits including performances based on your favorite past Pop Stars, Toys, and Scandals! Deafies in Drag is sure to give you the blast from the past you’ve been waiting for!

VIP Reception – wine, hors d’oeuvres and photo ops with the Stars at 10:00pm Deafies in Drag out of drag are really cute!

Puget Sound Association of the Deaf

Organizer of Deafies in Drag Show

All proceeds will be donated to Puget Sound Assocation of the Deaf’s new Deaf Cultural Center.

The Puget Sound Association of the Deaf (PSAD) Cultural Center’s mission is to serve as a center which provides educational, social, recreational, and resource programs to enhance the understanding, appreciation, and well-being of diverse deaf and deaf-blind citizens of all ages, their languages, their culture, and their contributions to society.