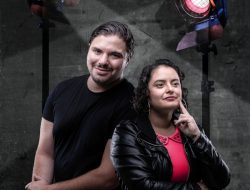 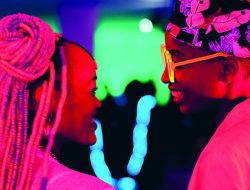 You’re gonna need them at the 5th Avenue Theatre and Seattle Rep this month as they both have emotionally fraught productions on their stages.

You’re also going to need a Trigger Warning for one of them, Seattle Repertory Theater’s co-production with San Francisco’s A.C.T. of A THOUSAND SPLENDID SUNS. A.C.T. commissioned and originally produced the world premiere of their adaption of Khaled Hosseini’s best selling book of the same name in 2017. The production was such a huge success in San Francisco and other theaters in the U.S. and Canada that A.C.T. reprised that production this summer for a two week run and a slightly modified version is what is currently on Seattle Rep’s stage now through November 10th.

Adapted by playwright Ursula Rani Sarma but largely faithful to Hosseini’s 2007 book, A Thousand Splendid Suns follows the lives of three generations of Afghani women living in war torn Kabul from the 1960s through the early 2000s but largely centered on the lives of Mariam and Laila, the two wives of shoemaker Rasheed, their husband who physically and emotionally abuses both women as well as Laila’s daughter Aziza. Rasheed is only devoted to his and Laila’s son Zalmai, the only member of the family he treats with kindness.

The play follows the lives of this family through the turbulence of various regimes, including the Taliban which puts women under a virtual house arrest not allowing them to be seen in public without the escort of a male family member. The terror of their lives under a despotic regime fueled by religious misogyny as well as living under the roof of a man who fundamentally believes in that intolerance propels a story that is long on pain and misery and short on much of anything else. There are numerous scenes of Rasheed physically and emotionally abusing all three women in the household, as well as abuses committed by male society in general…women are held in such low esteem by the Taliban that the segregated women’s hospital has few supplies, including anesthesia and pain killers (which are sent to the men’s hospital) which means Mariam has to endure agonizing pain during the birth of her child.

A Thousand Splendid Suns has a captivating story obviously…it’s that “emotional roller coaster” of strife in a war zone. It’s a play based on a book that is fiction but rooted in the reality of life in Kabul for the last half century. And, this production features a bounty of riches including a beautiful staging by Carey Perloff and evocative designs by the San Francisco based team from A.C.T. A chief highlight is the haunting live musical score, composed and performed by David Coulter that uses musical instruments native to Islamic and Afghani culture.

The play is also beautifully acted by the ensemble but most particularly by the two main women at the center of the story. Rinnabeth Astopol as the younger Laila and Denmo Ibrahim as Mariam give poignantly powerful performances that rivet and inspire.

If you felt there was a “but” coming, you were correct because while this production has many many wonderful things in it, it was also a production and story that I could not embrace. It’s a relentless two and a half hours of rape, beatings, abuses, and torture at the hands of males fueled by misogyny and the hatred inspired by the intolerances inherent in most religions. There’s a relatively happy-ish ending but it seemed a tad false and futile after all the horror portrayed. There were times that this story felt a bit like torture porn to me….I felt no joy or redemption by the end of the night, only horror, depression and despair despite the excellence of the cast and production. Audience members around me at tears in their eyes at the end of the night but I only had rage and nausea.

I felt emotionally manipulated by the material, which is fiction but based on the generalized horror of being a woman in Afghanistan as interpreted by the original male author, Khaled Hosseini (who did interview women living in Kabul at the time; the author himself fled Afghanistan as a child, in 1976 to live in France and the United States).  To be blunt, it felt “dirty” to be “entertained” by A Thousand Splendid Suns. I think creating difficult work that examines tough subjects like this is very much necessary but I can also question the “how and the why” of how such material is told. If it feels forced or overly manipulative, then it becomes problematic. Because the original story is fiction and crafted by a male author, it just feels…phony and contrived, like an old movie serial featuring the perils of a damsel in distress powerless to do nothing but be saved by a man.

And, while I can admire the excellent elements that went into the creation of this work, I also have no desire to ever encounter it again. I can only admire those elements from afar. The cast of Come From Away – Photo Credit Matt Murphy

Now, for a different roller coaster, one I’ve experienced before. This one has some connections to A Thousand Splendid Suns…there are obviously tangible ties to the Middle East in Come From Away, the Broadway musical about what happened to a small Canadian town as a result of the terrorist attacks in the United States that happened on September 11, 2001. And, that musical was originally staged in Seattle on its pre-Broadway tryout period, at Seattle Rep in a hugely successful production.

And, while both productions might be considered manipulative,  Come From Away is a completely different kettle of cod, emphasizing triumph over adversity and hate. There’s joy carefully crafted into the book for this show…you’re going to smile and laugh in between the tears of remembering that week in September of 2001. It’s also rooted with real people; the characters in Come From Away are based on the actual participants.

I reviewed the 2015 production at Seattle Rep and like most of the world, loved it and gave it a glowing review:

Come From Away is also blessed with superb design from the entire team including a simple but very effective turntable set by Beowulf Boritt, but it’s all captained by director Christopher Ashley, the artistic director at LaJolla Playhouse where this production originated…This is a very complex show to stage with a large number of characters and plot lines to keep track of but Mr. Ashley does such an amazing job of keeping every single one of those characters and their plots accounted for and entwined with each other. And, because the music is so carefully integrated into the story, it’s tough to decipher where Mr. Ashey’s staging ends and the work of Kelly Devine’s gorgeous choreography must begin; it’s all so effortlessly entwined…seemingly. Regardless, the combined effort of their work unites to form a seamless whole.

And, now nearly 3 years later and after hugely successful productions elsewhere and its continued run on Broadway (with worldwide premieres scheduled for the future), it’s all still a beautifully compelling story and production in its first official national tour that makes its debut in Seattle at the 5th Avenue Theatre, one of several theaters in the U.S. and Canada that took part in creation workshops.

The original brilliant cast is missing but the actors in this tour are all superb; if anything the show is tighter and more compelling now than it was 3 years ago, largely due to the Tony Award winning direction by Christopher Ashley, musical staging by Kelly Devine and the superbly tight book and charming songs by Irene Sankoff and David Hein.

It’s an emotional show. And, a hit so you need to buy tickets sooner rather than later.

AND, BRING THOSE HANKIES!!!

One Response to Review: Emotional Roller Coasters At 5th Avenue and Seattle Rep…One Grim and One Joyful