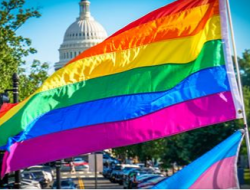 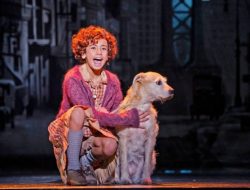 Lavender Rights Art Auction Fundraiser Has A Great Line-Up of Live Talent, Too

The Lavender Rights Project’s big fundraiser is all about the fabulous local queer art that will be auctioned and sold at the event happening this Friday, December 14th at All-Pilgrims Christian Church on Broadway on Capitol Hill. (Tix here including sliding scale pricing)

But, there is also some amazing local queer live performers on hand at the event which raises money for the group that provides low cost and free civil legal services to the Seattle LGBTQ+ community in addition to advocacy and education work.

Here’s some great info on the line-up scheduled to perform, including Lavender Country, Ms. Ara-Lei Yandall, and Tail Feather. In addition to holding the impressive title of Miss UTOPIA International 2018, our first performer, Ms. Ara-Lei Yandall, serves as the Program Coordinator at the Seattle chapter of UTOPIA (United Territories of Pacific Islanders Alliance).

As is described on their website, UTOPIA has worked since 2009 with Queer and Trans Pacific Islander (QTPI) leaders to create a safe, welcoming, supportive, and vibrant space for members of the community to address basic needs, build pathways toward new expanded career and life opportunities, foster a sense of common purpose, and advocate for social justice, education, and overall wellness among members of the Pacific Islander LGBTQI community.

UTOPIA is led and founded by women of color, identifying as transgender and/or fa’afafine. Fa’afafine is a cultural gender identity native to Samoa translated as “in the manner of a woman.” Since its inception, UTOPIA has worked to build power and help community members access resources, employment, stable housing, higher education, culturally competent healthcare, and more.

You can catch Ms. Ara-Lei Yandall’s performance at the Art Auction, and learn more about UTOPIA’s widespread community initiatives and programs at https://utopiaseattle.org/. Lavender Country, well known as a self-titled album released in 1973 by singer/songwriter/guitarist Patrick Haggerty, represents a crucial link to the past, present, and future of gay culture pushing back against the establishment.

Considered the first known gay country music album, Lavender Country is described on label Paradise of Bachelors’ website as “a scathing indictment of the injustices perpetrated on the homosexual community, a proud proclamation of gay identity, and a love letter of bracing intimacy and eroticism [that] appropriates the signifiers of the conservative country genre, queering its heteronormative vocabulary into a deeply personal language.”

Haggerty on the beginnings of the group:

Haggerty continues performing as Lavender Country with “his fabulous and talented band of rabblerousing merrymakers,” as is described on the group’s Facebook page. Join us at the Art Auction to experience Lavender Country’s ‘fuck the establishment’ tones in the seemingly-contradictory (but intentionally so) country genre.

Closing our night will be Tail Feather, a boi-lesque ballet presented by Earth Pearl Collective. Tail Feather uses dance, spoken word, boi-lesque, and theatre takes to share stories of masculinity from the masculine-centered woman while making parallels to the beautiful display of masculinity found in the plumage of male birds from around the world.

Tail Feather is director and creator Sadiqua Iman’s creative response to an African American queer elder’s question, “What happened to just being a good ole fashioned butch?” With choreography by Iman’s sister, New York choreographer Alia Kache, and original music by queer pop artists Be Steadwell, this collaborative project is a memorable tribute to and for the “good ole fashioned butch.”

As “bois of a feather,” Tail Feather performers dig into stereotypes about black queer identity, heteronormative politics within the community, and the sexy (and sometimes sticky) dynamics around love and sex. Check out Tail Feather’s visual expression in a new work of dance, theatre, and boi-lesque at the Art Auction, and follow their hashtags #boisofafeather and #tailfeathercrew to stay up to date on panel discussions, workshops, and events.

And, info on the event itself:

Join the Lavender Rights Project for our first major fundraising event since our founding in 2016!

Tickets include one (1) free drink ticket and an hors d’oeuvres buffet. Proceeds from the silent auction will benefit local artists and the Lavender Rights Project, helping to provide direct legal services for queer and trans low-income folks.

SLIDING SCALE
Sliding scale tickets range from $0-$24. General tickets can be purchased at $25, and folks who can afford to do so are encouraged to spend what is comfortable for them above this general ticket price. All ticket funds will benefit the Lavender Rights Project.

ACCESSIBILITY
Lavender Rights Project is committed to creating a space that is accessible for queer and trans people, especially those at the intersections of anti-blackness, xenophobia, and racism; disability; and/or low-income status.

The event space is wheelchair accessible and has gender neutral bathrooms. While we cannot guarantee a fragrance-free event, we ask attendees not to wear perfumes or other scents that may impact folks with fragrance sensitivities.

*More accessibility specifics, as well as public transportation and parking information, will be available on www.lavenderrightsproject.org/art closer to the event.