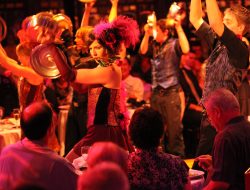 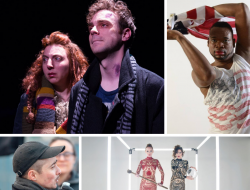 Review: Book-It’s “American Junkie” Is A Rough Trip…But, Is It Rough Enough? There were gasps of shock and pearls were undoubtedly clutched when Book-It Repertory Theatre announced their 2018/19 season last year. The literary minded theater company much beloved for its theatrical adaptations of every cherished book we ever read (or, were supposed to read in sophomore lit classes) like Jane Eyre and Frankenstein and more Jane Austen than you can shake a tea cup at, as well as more timely books, frequently in an “Oprah Book Club” vein, made a shocking announcement…

For 18/19 Book-It included a title that didn’t sound much like Pride & Prejudice or She’s Come Undone…it was the announcement of the gritty title of AMERICAN JUNKIE, the 2010 memoir by Seattle area native Tom Hansen that harrowingly detailed his years as both a heroin addict and dealer in the late 1980s and 1990s of grunge era Seattle. It even came complete with a melancholy cameo from Nirvana fron tman Kurt Cobain, a customer of Hansen’s.

With its very graphic descriptions of the horrors of heroin addiction including vivid details of flesh rotting from excessive injections, American Junkie definitely seemed a surprising departure from Book-It’s usual fare.  For many, who have hoped Book-It would endeavor to produce “tougher” material it was a welcome sign but also one that raised questions if the company could do it justice..could Book-It pull off grit and grunge after years of producing plays about tea and sympathy?

Adapted by Book-It co-founder Jane Jones and her husband Kevin McKeon into a mostly fast paced 100 minute play (also directed by Ms Jones), the play manages to mostly solve the problem of how do you adapt a complicated life story into a coherent piece of entertainment.  Do you take a start (birth) to stop (death or the end of the story) approach, which can be a bit rote, or do you tell the story out of order?Books and films can easily bounce back and forth in time to tell a story but that’s trickier to pull off on a stage. Jones and McKeon manage to do so, with the play moving between two time lines; one centers on our main character of Tom, at the worst part of his addiction essentially wasting away in a bed and then following him as he gets treatment and begins the long climb out of his illness. Those scenes alternate with flashbacks to Tom’s childhood, youth and young adulthood and the journey to that point where he is laying on that mattress wasting away due to his heroin addiction. The rapid transitions between those two threads are deftly handled; the play never lingers too long in any individual scene and the pace of it all certainly ties in to the frenetic life being led by Tom Hansen.

But, the problem with that approach is that we never really get to know any of the characters… all the people in Tom’s life. Ian Bond stars as Tom and solely plays that character but the other 5 actors play dozens of different people who populated Hansen’s journey. The five actors are talented at playing this whirlwind of characters but…they’re all just a blur after awhile. It would have been nice to have gotten to know a couple of them a bit more, to help us learn more about Tom. And, you might argue that the play has to center only on Tom but…why? Yes, it’s Tom Hansen’s story but the other people in our lives are also important pieces in the puzzle of who we are as individuals. The play’s over reliance on Tom got a bit boring for me after awhile, if I’m being honest. The Tom character really never stops talking for those 100 minutes and it got to the point, for me, that I just needed him to not say anything and either let the other characters help tell his story. Or, maybe let other sounds take over for awhile.

And, that’s a problem I’ve had with other Book-It productions as well. It’s a literary theater company and faithful adaptations of books are “their thing” but books and stories don’t always need to be all about spoken words. American Junkie is a production that would have benefited from a more complex sound design. There are numerous great period songs used in the production but sound design is more than just playing snippets of popular music. I like Kyle Thompson’s sound design for this show but I wish there were more of it and not necessarily just song based. In fact despite the handsomeness of all the design elements, the entire show really needed MORE to pull us into this very Seattle story. Catherine Cornell has created a fun, grungy modular set to represent the very many different locales in the story and Tristan Roberson has once again done a terrific job with his creative lighting and projection design but…it just needed MORE/BIGGER/BOLDER elements to make it pop. (And, I’m well aware of the design limitations of the Armory/Center House theater at Seattle Center). As for Tom, I think Ian Bond does a solid job playing him but…Mr. Bond is a talented local actor and I’ve liked many of his performances in other productions over the years but I really didn’t buy him as Tom Hansen. If you’ve seen/heard the real Tom Hansen or even if you’ve read the book, it’s obvious Tom Hansen is a grunge rock ‘n’ roller…an ex-junkie…a  survivor. He’s rough. He is ravaged. He’s an original American, heavily lived in character and I never really got that with Mr. Bond’s portrayal.  Tom Hansen is that scarred slightly scary dude sitting in the corner of your local diner nursing his 8th cup of strong coffee. Mr. Bond’s portrayal seems like your nice neighbor who might be your kid’s algebra teacher or your brother-in-law enjoying his second cup of Teavana Peach Chai and feeling guilty about it.

And, that’s not Ian Bond’s fault…as stated, he is a good actor but even good actors get miscast. And, what’s odd with this production is the fact that it features ANOTHER actor in the ensemble with all the necessary qualities to play a grungy rock musician; Tim Gouran has the grit and the voice and the posture and the tattoos to embody that kind of character (which he uses to great effect playing many other characters in this production) so I’m confused as to why he wasn’t cast? Casting against type can sometimes work but here…I don’t really think it does.

That’s the chief problem with Book-It’s adaptation…it really doesn’t understand the material or how to present it. Book-It “gets’ tea cups and crinolines but track marks and exchanging blow jobs for heroin is a bit out of its purview. The production never escaped feeling like a weak ersatz reproduction of the real thing. It felt like playacting. I applaud them for the attempt but it might it have been a better idea to partner up with an edgier theater company like Washington Ensemble Theatre or Pony World to tackle this darker side of literature. American Junkie has its merits; a talented cast and handsome design, but it didn’t gel for me. It takes more than some vague angst and a Nirvana soundtrack to capture the dark despair of being an American junkie.

The real irony here…on opening night of this play,  I walked into the men’s room outside the Center House theater in the Armory/Center House building where this play is being produced and witnessed actual Seattle junkies shooting up.

It’s hard for art to compete with reality.