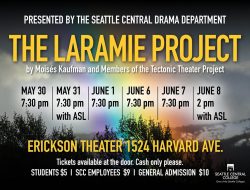 Another section of southwest metro Seattle/King County is gearing up for their Pride celebrations…BURIEN, that popular little enclave where quite a few gay & especially lesbian folks seem to live, will host their 3rd annual party this weekend.

It all begins Friday night with their Drag Queen Bingo event then gets even bigger on Saturday, June 1st with their main Pride Festival in Town Square Park.

Back for its third successful year, Burien Pride is a family-friendly weekend that includes a little something for everyone. A kid-friendly area will include arts, crafts, games, and more. For the first time, an extended beer garden layout will give the 21+ crowd a fun time of their own! And who could forget the street fair that started it all?

Burien Pride will be hosted by DJ Delirious (Limelight Productions Presents)! A featured performance by the Dames of Drag also returns!

Additional information can be found at burienpride.com.

Also note that Burien isn’t THAT hard to get to, even without a car. Metro buses will get you there from DT Seattle in about an hour or so and you can even take light rail, then bus or cab/uber to Burien. Presented by Burien PRIDE! This is BINGO in the Park! We will have a very large beer / wine garden and plenty of tables. Come join this family friend event. Tickets are $20 and then $5 cash at the door for your Bingo Cards. Reserve your tickets at www.DiscoverBurien.org. Family program, all ages welcome. What do drag queens and children have in common? They love dressing up and all things sparkly and fancy! Join special guest Aleksa Manila for a fun-filled hour of stories, songs and photos. Created by Michelle Tea and RADAR Productions in San Francisco. Drag Queen Story Hour events are now […]

Pride Saturday at The Point (Burien)

Pride is back in Burien and we are bringing the fabulosity! Join us for drink specials, food (special menu), games and music on the outside patio and the COOLEST Tea-Dance in town! Special appearances by some of the communities known queens from Dames of Drag!!