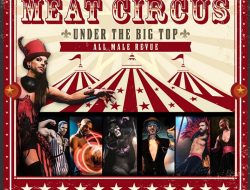 SEATTLE – May 23, 2019 – Seattle Pride is kicking off this year’s Pride celebration with the tenth annual Volunteer Park Pride Festival from noon to 7:00 p.m. on Saturday, June 8 in Seattle. The event is Pride’s annual celebration of queer arts, music, performance and culture. The free event will feature a beer garden, food trucks, local crafts fair, sponsor and community nonprofit informational booths, and is highlighted by live concert performances.

“The Volunteer Park Pride Festival keeps getting bigger and better every year,” says Seattle Pride Board President Kevin Toovey. “The Festival began in 2009 as a family picnic with hot dogs and inflatable bounce-houses and has grown into a full-blown festival with a beer garden, food trucks and top name musical acts – there’s truly something for everyone.”

1:00 p.m. Left at London – a trans woman known for her intimate and accessible pop writing sensibility as well as her introspective lyricism focused on subject matter specific to her life.

2:05 p.m. SassyBlack – an unexplored galaxy made of fist-pump, funk, and beat-fertility known for her blend of experimental hip-hop, unpredictable syncopation and neon-womanism.

3:10 p.m. Whitney Mongé – raised with rhythm and blues in her blood, her powerful smoky voice and guitar playing draws in listeners, coining her own genre, alternative soul.

4:25 p.m. J GRGRY – a musician that elicits joyous inclusiveness and challenges the status quo, his mighty melodies bring people together.

“Events like this based in love and community, centered around art and music are so important to connecting people, as a city like Seattle continues to thrive and expand,” said J GRGRY who grew up in Seattle. “I’m so proud and excited to share my music and my message of love and acceptance in this environment.”

In addition, informational and interactive booths are being planned by many of Seattle Pride’s valued sponsors and community partners – from Delta Dental of Washington’s Fairy Wing Decorating Station hosted by the Tooth Fairy to All is Divine Tarot Card Readings, Seven Star Women’s Kung Fu’s onsite Self-defense Demonstrations and Lessons, MOViN 92.5’s Photobooth, AEG’s Prize Wheel for Bumbershoot and The Showbox prizes, and much more.