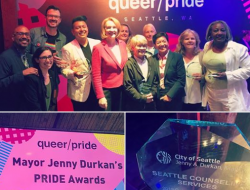 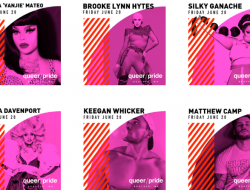 The top photo by Joseph Ambrosini of the Daily News is the ONLY known photo from the first night of the riots. The bottom photo is from a famous series of photos taken by Fred McDarrah on the second night. Both photos really indicate that the majority of Stonewall Rioters were very young street kids. (not surprisingly….the young are more likely to riot than the middle aged…) You should also note that some of the male presenting people in these photos were probably identified as “queens” at the time. It was illegal and very dangerous to dress as “gender non-conforming” in 1969.

Can we just stop with the whole fake “Stonewall Magic Brick” thing? Or, using it as part of the urban legendary narrative of Stonewall that tends to feature a dramatically back lit Marsha P. Johnson (or Sylvia Rivera or some white boy from Indiana in that terrible movie…) taking a very pregnant pause as the crowd silently holds their breath in fear and anticipation and awe as they (Marsha/Sylvia/Pretty But Bland Actor Boy Who Was Actually British) lobbed “The One True Brick” (that they carried with them at all times), through the mirror behind the bar/a plate glass window to officially start the Riot which led to our Freedom!

Except, that didn’t happen. There was no carefully choreographed “magic moment”. A brick didn’t initiate a riot. You have to LEAD up to a brick!

(Also…how did Marsha get that brick in her purse? Gurl…bricks are HEAVY!)

Let’s talk about the early morning hours of June 28, 1969. Some backstory:

The Stonewall Inn. A Mafia owned gay private club with a high cover charge, filthy glasses (no running water at the bars) and a regular payoff system in place to buy police protection to keep the club open…which meant warnings if raids were to happen, which they periodically did to satisfy “public morals and standards”. But, there was a new cop in the neighborhood and rumors that the Mafia owners were maybe doing some blackmailing of the customers on the side. The 1:20 am raid on June 28th was a surprise for two reasons: one, the bar had just been raided a few days before; secondly, the Stonewall owners hadn’t received a warning this time. And, it was odd for a club to be raided so late in the evening, when the bar would have been so busy with weekend revelers. More patrons to process meant more work for the cops to deal with them all. Also: bar customers at 1:20 am are more likely to be intoxicated and prone to belligerency than a drinker having his first drink at 9 pm. It was a FUBAR situation from the get go.

(Side note because I recently saw the Stonewall referred to as being a “tiny” club when the riot occurred…which wasn’t true. The Stonewall Inn in 1969 was a LARGE club occupying TWO buildings, 51 and 53 Christopher Street, joined into one. A main front bar [with a dance floor] where the older crowd hung out and the side/back bar [also with a dance floor] which was younger skewing and where the “queens” tended to hang out. [Also note that “queen” didn’t necessarily mean a drag queen or transgender person; any overtly gay male who behaved “effeminately” or “campy” would be referred to as a queen.] The current bar known as the Stonewall Inn, only occupies the 53 Christopher Street building, aka the left side as you face the front door, which would have been the “young/queen” side of the 1969 version of the club and thus the current venue is half the size of the earlier incarnation. Got all that? Also: the 1969 club had disgusting bathrooms and no other exits except the front door.)

In a nutshell, that night:

The cops came on a muggy summer night, and people weren’t having it and started resisting the cops…which didn’t normally happen. At first it was just simple verbal complaints and resistance to being shoved around. Folks with correct clothing on (male clothes for men/female clothes for women; no mixing!) and legal ID were allowed to leave the bar, but many of them lingered around to make sure other friends got out as well as to “see where this was going”. (Normally, the gays had quickly scattered after a raid; thankful to have gotten out without harm/arrest.) That night, there was a sense of danger in the air. People in the neighborhood could see something was up and crowds began to gather outside. The mood grew increasingly tense as the cops started roughly handling people both in the club and as they pulled them outside to shove into the paddy wagon. Queens were resisting this treatment the most and were yelling at the cops and shoving back. A lesbian who was resisting the cops roughing her up as they tried to cram her into a squad car, screamed to the crowd “Don’t just stand there! Do something!!!” which was an even bigger trigger. Coins were getting thrown. Nearby garbage. There were more and more taunts towards the cops. (“Grab that pig and fuck his ass!”) Things grew increasingly more violent as resistance became a riot. BRICKS started appearing, most of them pried out of the streets. The terrified cops pulled back into the Stonewall with some of their prisoners and barred the door. A parking meter was pulled up and used as a battering ram. Flaming projectiles were tossed into the bar.

The rebellion had begun.

A riot is an organic thing that needs fuel to grow from a small spark of resistance (“Quit shoving me, you dirty pig!”) to physical acts all happening simultaneously. That was Stonewall. It wasn’t a series of carefully choreographed movie moments. It was a riot and a rebellion and the start of a revolution. We really don’t need to make it a “Moment by Kodak” in “SurroundSoundCinemascope” for your “viewing pleasure” for it to have meaning.

So yay for people like Marsha P. Johnson and Sylvia Rivera and “that mysteriously feisty lesbian” and Raymond Castro and Marilyn Fowler and Jackie Hormona and Craig Rodwell and Dave Van Ronk, (the straight folk singer who fought back that night and got arrested), and the hundreds of others who waged war that first night and the other 4 nights of Stonewall Rioting over the next week.

Even a big yay for that magic brick while remembering it took a Greenwich Village full of freaky angry people to fight for equality.