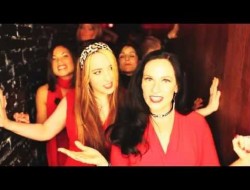 Saturday June 25, 2011, it was the biggest night that Seattle Gay Scene has seen in years. Capitol Hill hit capacity with so many events kicking off simultaneously and each one of them featuring their own headline entertainment and celebrity dance DJs.

First, Purr’s oh so popular Block Party filled up quickly with DJ Skiddle kicking off the warm afternoon and just prior to a line forming to get in, all the way down the street and around the block, for the rest of the evening. Later, that celebrated and attractive DJ duo The Perry Twins heated up the evening crowd promptly at 10pm spinning some of their best beats, L.A. style. The crowd was all smiles, at least for those that could get in, for a flawlessly picture perfect event at Purr.

PrideFest’s Red Party at Neumos featured Seattle’s best dance DJ, Brian Gorr, and filled within an hour of opening. Even at $25, tickets sales appeared very brisk resulting in one of the biggest gay nightclub events we’ve seen in years. DJ Brian Gorr knew how to work up this relatively young crowd just enough into a HiNRG dancing frenzy but also meticulously was able to keep the energy going literally all night long until 5am. One Degree Events may have topped themselves with this latest event. It was incredible to see DJ Brian Gorr performing in a relatively big venue and judging from the crowd’s reaction, most everyone agreed.

The Cuff Complex presented a more familiar and friendly pride party feel with a relatively low cover charge and the impeccable DJ John Le Page from San Francisco until 3am.

Women’s events kicked off in at least six different venues. There was a lineup for most of the evening at Wildrose’s Beer Garden of both men and women. The ever popular “Hot Flash” actually held three dance parties at three different locations with just one cover charge until 10pm. The women’s Red Party at Baltic Room, featuring Spinderella, was a joint effort by One Degree Events and Girl4Girl. And down at Rebar, DJs Amateur Youth and Mathematix held their annual “Cherry” Gay Pride Party.

But that’s not even part of it. From Grim’s “Ruckus Party” to Havana’s “Hey Tranny It’s Tranny” to Eagle’s proverbial Underwear Party, last night there wasn’t any space going unused along Pike and the many surrounding streets on Capitol Hill. Of course, I am ignoring the violence and damage created by the roving anarchists last night but there’s always someone who wants to be the spoiler.

Today the weekend hits climax with Seattle’s huge Pride Parade in downtown and PrideFest at Seattle Center, the largest gay pride festival in the country. Following PrideFest head over across the street to REBOUND at iMUSIC with DJ Steven Oliveri from FIRE ISLAND! The event starts at 3pm right across the street from EMP and goes all the way until 3am. Talk about getting you money’s worth. You can go here and sample DJ Steven Oliveri’s music. But there are a whole host of events going on today which Michael Strangeways has posted below.