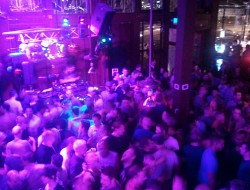 December 2, 2011 Comments Off on Fringe turns 2 this Saturday at The Seattle Eagle Views: 1131 Nightlife, We Love The Nightlife

Fringe turns 2 this Saturday at The Seattle Eagle 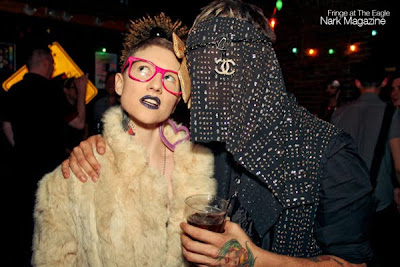 “About a year and a half ago, a nice young man moved to Seattle from San Diego. Suddenly, crazy-glamorous new club nights started popping up. Instead of wearing jeans and T-shirts, people started turning up in full-body spandex, rhinestones, and garbage-bag dresses. And dance floors were filling up” -Kelly O’, The Stranger

It’s crazy but it’s true, Fringe, Nark Magazine’s first love child, is turning two this weekend!The party that pushed Seattle’s burgeoning club kid scene, put The Eagle back on the map and opened its doors to all walks of life, now lives on to its terrible twos (which is similar to dog years so we are actually more like teenagers now).

With the help of Dj Skiddle and Brad Crelia, Fringe kicked off its public debacle in a blurry smash of boys, booze, ladies, wigs and rhinestones that lives on today. That cage has became the beacon of light for local and moved on celebs, queens, performers and more such as Lisa Dank, Stella Rose, Amoania, Phoebe Fondue, Caressa Dick, artStar, Wiggy Stardust and so many more, as well as werked out by the likes of Ongina, Jackie Hell, Richard Kennedy and so on.

The Top Ten Fringe Moments, after the JUMP!

The Social Seattle asked me to put together a top ten moments of Fringe, and they are as follows-

-Most recently, at the last Fringe, when that humungous muscle-tank got in his underwear and starting rag-doll tossing Faz around in the go-go cage, it was HOT. That daddy went home with someone VERY unexpected that night!

-NYE 2010, right before the drag performance Phoebe Fondue walks up to me and says, ‘do you mind if I show a little butt?’ I say, no, of course not, just keep it within limits. Next thing I know I look over at the cage and Phoebe Fondue is COMPLETELY naked.

-At Candy Fringe long ago, when we managed to drag a marching band in off the street to march around the Eagle dancefloor, playing along to the music.

-That time everyone got covered in and fed chocolate and were too drunk to realize it was coming out of Phoebe Fondue’s ass.

-The puberty party, it had the best poster EVER, but I was the only one who came in theme and just ended up looking like middle school leftover emotrash. At least my pimples had rhinestone whiteheads.

-The medical night party when Jackie Hell came up to me all crazy and said ‘I just keep eating all these pills off the floor!’ Later, I found out they were nightmare control and stool softening meds, I hope she slept sound.

-Caressa Dick wearing so much lip gloss over her entire face that she looked like the plastic surgery cat lady. Also she probably peed on someone that night.

-Selling Jello shots. In a dress, I did alright… in nothing but my skivvies I made a killing. That’s the night I learned the true power of sex appeal. –Jinkx Monsoon

And now! We present our big blowout two year anniversary, this Saturday night (12/3) at The Eagle! This time we are really mixing up the game and bringing you something all new.

Fresh in from San Francisco we have our Hard French babe, Dj Carnita with a bag full of 45’s. Yes that’s right, this Fringe is going to be ALL vinyl, all Soul, Funk, R&B, Oldies and Disco! Now that’s a sockhop you can cover in glitter.

Alongside DJ Carnita will be Havana’s Sophisticated Mama soul DJ, Nitty Gritty! We are pulling him away from the bachelorette parties at Havana and putting him in a gay bar right where he belongs, let’s break him in easy okay?

And the theme for this affair? Celebrity Zombies. Why? Because we can. Pick your favorite celeb, singer, performer, artist- whatever- past or present (or if you are really good, from the future), and create your zombie form of them. Then I say we invade Linda’s the next day for a zombie brunch? Anyone?