Tacoma Gets All Pridey This Saturday 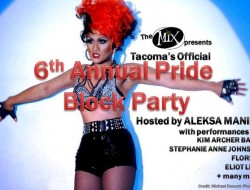 6 Reasons Why You Should Meet, Drink, & Mix at The Mix Tacoma this Weekend Hot Bros at The Mix!

Once upon a time, a bar called ‘Cheers’ was the place that everyone knew your name, but now I believe that prestige is reserved for The Mix in Tacoma, WA. Yes, if you can believe it, there are gay bars outside of the Seattle bubble and this one is certainly the best of the best in the City of Destiny… then again, there’s only two of ’em, so not much competition.

Anyway, Tacoma itself used to be hustlin’ and bustlin’ with splendid faggotry. There was the heyday of Destiny’s, the gritty greasiness of The Airport Tavern, and there was even a primary Lesbian go-to muff spot for the ladies. However, they’ve all since closed their blinds and have locked the doors tight. Leaving just The Mix and Club Silverstone as the LGBT debauchery locales.

That’s not to say that the sole survivors aren’t worth your time, because they are! The Mix’s Sexy 6th Anniversary is this Saturday, May 17th at 9pm with a $3 cover, 21+ with ID. And, here are the 6 reasons why you should be attending the party:

REASON #6: BECAUSE, IT’S SOMETHING DIFFERENT
Sure, you can be a hermit on the Hill and go watch Le Faux for the umpteenth time, but why not take a break from the same old same old and venture off to Tacoma, where you can meet new friends? Or, possibly, ‘the one’? Seattle’s nightlife will always be there. Be adventurous and go some place new.

REASON #5: BECAUSE, THERE WILL BE SPACE TO DANCE
Despite it’s small charm, The Mix always allows it’s patrons to dance the night away on their petite dancefloor. This year, DJ Papa Razzi and DJ Smooth Ride (they sound like drag king names, right?) are there for your music pleasure. That big ass, inconvenient pool table will be pushed to the windows, offering more wiggle room. Word on the street is that soon they’re getting rid of that table entirely, which would be the smartest thing ever. Like, you have no idea.

REASON #4: BECAUSE, TRASHY IS CLASSY & SEATTLE QUEENS LOVE IT
The Mix is definitely not Purr, by any means. Free spirited ‘no1curr’ gays outnumber all the pretentious homos 10 to 1. And, The Mix doesn’t try to be anything other than what it wants you to experience: a damn good time. They don’t care much for frills and bougieness, they just want you let go and be buckwild. The drinks are strong too, but don’t go crazy! The bearded power-bottom Jeffrey and his beautiful partner-in-crime Jesyca will cut you off quick. Notable Seattle drag queens that have graced Tacoma are Aleksa Manila, Atasha Manila, Mama Tits, DonnaTella Howe, and Olivia LaGarce. Even the Bremerton beauty and Nark Magazine-darling, Cucci Binaca, frequents the bar a lot. But, now that she’s off the market, probably not. Oh well! Your humble authoress (the slut in the middle of this photo)….

REASON #3: BECAUSE, YOU SHOULD CHECK IT OUT BEFORE TAC-PRIDE
I’ve been to many Prides in Seattle and there’s something about Tacoma Pride that just sets itself apart. Both are amazing in their own right, but Seattle’s where you can get the parade aspect and do important stuff within our community, while also partying. Tacoma’s similar, but I feel like a lot of people just set out to get white girl wasted. Rumor has it that someone that rhymes with Buttseksa Fanila will be fronting The Mix’s mainstage this year!

REASON #1: BECAUSE, BECAUSE, BECAUSE, BECAUSE, BECAUUUUUSE!
Tacoma gets a bad wrap for being ‘ghetto’ and that your car might get broken into, but puh-lease… I hail from the impoverished wasteland of Flint, Michigan. Tacoma’s actually becoming a lot more gentrified and the apartment rates are rising to Seattle-like proportions. That’s off topic, though. You really should come by sometime to meet, drink, and mingle. Give it a touch! Give it a taste! Give yourself a new experience and be amazed at the classy dive bar that is my home bar, The Mix.