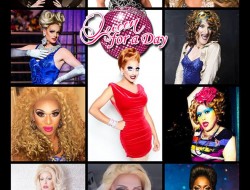 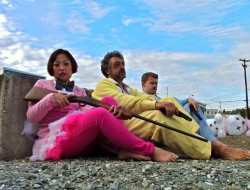 July 9, 2014 Comments Off on Interview with a Glampire: An “Interview” between “James St. James” and “Michael Alig” about Re-bar’s “Lip Service” Views: 2106 Drag, Nightlife, We Love The Nightlife

Interview with a Glampire: An “Interview” between “James St. James” and “Michael Alig” about Re-bar’s “Lip Service” Lip Service is the one-night dance party at Re-Bar this Saturday, July 12th, at 10pm.  Door is $10 with all proceeds donated to benefit our local LGBTA organization, Gay City Health Project. VIP guests Michael Alig (Craig Trolli) and James St. James (Joel Steinpreis) invite you to get sweaty on the dance floor. (The real Alig was a murderous 1990s Club Kid and is featured in the awesome documentary Party Monster and was played by Macauley Culkin in the shitty movie version.)  In this special interview, they channel their characters to discuss Lip Service, ass-to-mouth, and why you’re coming to this event.

James St. James: Michael Alig!  You’re out of prison for just over two months, and out of the blue, you decide to haul your saggy ass to Seattle.  What made you do it?

Michael Alig:OMGXTC, James!  Well, I heard in prison about how Seattle loves me so much they did a show about me and so I got permission from my parole officer in Brooklyn to fly over here, just for this Lip Service charity event!  I mean, I’m pretty sure I mentioned it to him…   Anyway, can I just say, James, thank you so much for gaining all that prison weight for me!

JsJ: Haha.  Lip Service charity?  Is that something you learned in the slammer?  I watch Orange is the New Black, you know.

MA: No, no.  Lip Service is a queer dance party this Saturday the 12th with all proceeds benefiting Gay City Health Project.  Lip Service is Jell-O shots and booty pops served with a side of go-go cub.  It’s a night of shenanigans with a free photo booth!  You know, Orange is the New Black does remind me of my experience in prison.  I was in the sissy ward, so it was just like being around angry women all day!  Of course, we didn’t have a pretty [transgendered individual] to do our hair, though.  We had to do it ourselves using plastic scissors and a plunger! OMGLSD! Is it ok to say “sissy”? I can’t keep up!

JsJ:Don’t even bother to keep up.  When I wrote my autobiography about your life, I had acid flashbacks every hour on the hour, and I loved it.  So, Michael, are you able to compare the Seattle scene with NYC clubbing in the early 90s?  It must be so similar. This event is for everyone! (photo by Robert Kern)

MA:  As far as I can tell, the scene is just Re-Bar.  That’s where Lip Service is! There are no other clubs, bars, or theaters to go to.  Re-Bar may pay me with cigarettes, but it’s true!  It’s Re-Bar, Adé, Sparkle Leigh, and ArtStar.

JsJ: Oh! Those names!  They sound like amazing club names!

MA:  Oh, no!  Skinny, glamorous, talented, and talented.  And glamorous.

JsJ: Why, Michael!  You just used up all your adjectives…twice!

MA:  And ArtStar is the butt baby of Leigh Bowery and Divine.

MA:  AND four celebrity DJs, and each so talented!  Not like my ex, Superstar DJ Keoki.

MA:  He made me promise not to tell you, specifically.  Oh, and there’s a birthday girl!  You know, it’s a funny story, but on Halloween, I FaceTimed her from prison, saw what she was wearing, and christened her Tori Godspelling.  She said she would get her name copyrighted, and then she fell in love with me, of course. And then we made fun of your book and your face.

JsJ:  God, what do you think his online name would be? Probably Superstar DJ Keoki.  He’s so stupid, but so cute.

MA:  Plus there will be a Lip Service panda. If you’re anybody, you have a panda. (Not sure if the panda and/or the model were harmed in the making of this Googled image.)

MA:  Nothing you picked out yourself.  For you, a glittery shower curtain or a California king sized comforter.  For everyone else, dental floss, condoms, and smiles.