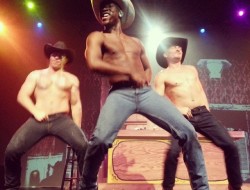 Need Something To Do Tonight Involving Almost Nude Men?... It’s been eighteen years since I’ve been to a Star Trek convention. The last one I attended was the 30th Anniversary in Toronto, 1996. After that, I didn’t expect any convention to be bigger or more spectacular. But I do admit I’ve been a little spoiled by Seattle nerdCons.

That being said, SHAME ON CREATION ENTERTAINMENT.

Now, I had my own frustrations with not being able to attend Friday’s karaoke night or the ST:TNG reunion show on Saturday night. Those feelings were completely separate from the SHEER RAGE I seethed after an hour of showing up at the Meydenbauer Center in Bellevue on Saturday the 13th. A girl who wanted a steampunk convention for her birthday did a better job than Creation Entertainment (see: Steamposium). You could’ve planned this better in your sleep, without knowing a lick about Star Trek or event planning.

Let’s get to specifics. Rule No. 2 of convention planning is: Don’t Cause Confusion at the Ticket Line. No one should be milling around, getting ignored, and trying to find out which line they should be in. Lines should be clearly labeled, with ticket workers aiding queue formation and directing flow. This convention? Good luck. And what’s Rule No. 1, you ask? MARKETING. Why did it take until my editor posted a blurb for me to even know this con existed? I should’ve seen it on Facebook, Twitter, posters around town, or at least heard it from my geeky friends who know more about geek events than I. What the hell? And—get this—check out the program once you got in:

Screams excitement, doesn’t it? That’s not photo editing, folks. It really was a sheet of paper, folded in half, in black & white. And did you catch the snore-fest website?

Now, I can forgive the program. To a point. Costs have to be cut somewhere. But further proof of LACK OF BUDGET was evident in the use of space as well. Now, I know Meydenbauer has a ton of space to fill, but when your event is small, you don’t make it look SMALLER. You fill it up, dammit! There were fewer than 20 merchandise vendors. I walked in, saw this: Look at all that empty space!

and thought, “You have GOT to be kidding me.” Local favorite Mishu was there, and it was fun to see Federation of Beer, but I doubt if more than two of those vendors were local. Not even Golden Age Comics? Come ON! This room was next to the theater, where EVERY event was held besides photo ops (for which people had to go up two floors to attend). That’s right, folks. Ninety-five percent of the convention was held in TWO rooms. Snacks and coffee were sold, no biggie. Oh, and by the way? NO PANELS. I know many ST cons are built around autographs, but this is 2014! Granted, the celebrity guests (Walter Koenig, Jonathan Frakes, Jeri Ryan, Brent Spiner, Marina Sirtis, Michael Dorn, Tim Russ, John Billingsley, John de Lancie, Denise Crosby, Ethan Phillips, Jeffrey Combs, Anthony Montgomery, and Rene Aberjonois) were awesome, and it was cute to see trivia and auctions. But seriously? No panels? Dude, do you even Con? Though I give much respect to the stars for putting up with an event this lackluster.

Also, I was there on a Saturday. Every nerd/geek who goes to conventions knows that Saturdays are the biggest days with all of the best events, so naturally those days are the busiest with the biggest crowds. I was there until about 4:30, and I’d be surprised if 100 people showed up. That says something. A big something. I spoke with some of the fans. Someone mentioned that Seattle had to compete with San Francisco for Star Trek con, and in fact the celebs at this one had flown up from there to be here. OK. I could give them that. But that’s also poor scheduling on the part of Creation Entertainment. There was even a sign labelled, “Klingon Empire” that pointed to…wait for it…nothing! Or the restrooms. Whatever.

Most of the fans ranged their opinions from “meh” to, “It was better last year” to, “I’m just happy to be attending something having to do with Star Trek and not have to travel to San Fran.” Read: “I can’t believe I paid for the Gold Weekend ticket package for this.” Many people expressed that there was entirely too much time between photo ops and the reunion on Saturday. On Sunday, people didn’t get a chance to wait around or use the restroom because every celebrity was booked one directly after the other.

I met up with a friend, and this was her first Star Trek convention. I didn’t want to spoil it for her, so I didn’t unleash my fury. She was mostly pleased to get some autographs and a photo op with Walter Koenig (Ensign Chekov from TOS). She was much more positive about the experience, and I give her all the credit in the world for that. I sincerely hope she gets to attend the 50th Anniversary in 2016.

You would think after two recently successful Star Trek films (Star Trek and Star Trek: Into Darkness) there would be…yanno…SOMETHING better than the pathetic pandering offered by Creation Entertainment. They couldn’t have even held it in downtown Seattle, which would most certainly guarantee a higher turnout. It honestly looked like they threw this together on a wink and a smile, and hoped for the best. Hell, even the PR person at the ticket line asked a fan to “bring in some energy, ’cause we need it.” Well then give her something to be excited about, for Q’s sake! You can’t expect people just to walk in and be stoked when you’re offering them so little, at such an expense. SHAME ON YOU, CREATION ENTERTAINMENT. How DARE you treat the fans this way! The Star Trek fandom has been around longer than Star Wars, and is pretty much surpassed only by the comics industry. I didn’t expect an ECCC, but I certainly expected a show of RESPECT for people who have loved something so strongly for 48 years. It was a couple of fans who saved the original series from getting cancelled, or didn’t you know?

Just to recap: This convention ran purely on the offerings of one major event (the ST:TNG cast reunion), autographs, and celebrities. That’s it.

On a positive note, here are the only highlights I saw: And another thing: It’s important to mention that Star Trek conventions have always been free from harassment and judgment. There’s simply no room for it, because that’s how fans stay true to the series. That was, and always will be, one of the best things about them.

I did get to ask a couple of the stars questions. Of Sirtis and Dorn, I asked, “How did the show Gargoyles get to be one huge Star Trek reunion?” Sirtis (the more talkative of the two when they shared the stage) laughed, then replied, “Gargoyles was shot in one room with all of the voice actors in a circle, which doesn’t happen often. …After the first few, it got to be a thing [with the producers] to see how many Star Trek actors they could get.” Michael Dorn had actually tried out for Goliath, the main character of the show. Squee! Sadly, I didn’t get to ask John de Lancie anything, and he’s my hero because Q is my favorite. I last saw him twenty years ago, back when autographs were free. He did confirm, however, that the Picard/Q relationship was “two alpha males” in a “‘who’s on top’ situation.” Mr. de Lancie, I couldn’t agree more! (“Tapestry,” anyone?)

But when Denise Crosby came on, I was one of the first people up! Fresh out of GeekGirlCon, I told her that I had attended the “Trek Women in Charge” panel, and asked if she looked back on her character of Tasha Yar from a feminist angle, and whether she had thoughts on it. She said, “Well yeah, that was the frustration [with her deciding to leave the show]. Here was a strong woman, the Chief of Security for the Federation flagship, and show after show went by, and…nothing.” She was just as annoyed by the under-utilization of Yar as every fan out there. But she was happy to do “Yesterday’s Enterprise” because the writing on TNG had gotten much better. And she got to play her own daughter, which is unheard of. Yay!

I’d better wrap this up before you get bored to tears, or, hopefully, angry enough to organize your own convention. Trust me, it is *high* time ST cons are fan-run again. There might still be a few out there. But folks, WE DESERVE BETTER. The fans I saw this past weekend who were just so happy to cosplay, or talk about episodes, or trade random info, or grab an autograph…they are who the conventions are for. Sirtis even mentioned that Star Trek fans are the best, because they are so loyal. And she meant it. Shame (or insert F-word here) on Creation Entertainment for pissing on people’s joy, and taking their money for very little in return. They have no clue who they’re messing with, and how much money they’re losing because of their mediocre performance. Seattle events don’t have to be the same as San Fran or NYC, but I’ll be damned if I let another year go by letting a fandom near and dear to my heart get treated like a bunch of red shirts.

One Response to Star Trek: TNG Cast Lights up Bellevue…At A Convention Run By Incompetents