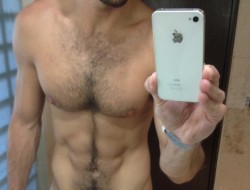 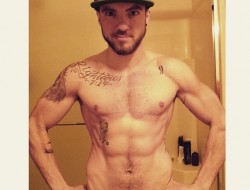 Trans* bodybuilder Aydian Dowling is in the lead for... “If I ever got AIDS, I would kill myself.”

We were lying in my bed, both still naked, and this is what he decided would make for good discussion. Needless to say, it’s a moment that will always stick with me.

As random, frank and dark as the outburst was at the time, what really weighed heavily on my mind was the frightening image in his words. If he ever got HIV, he would kill himself. I wondered why this was.

My first experience with HIV was when I was five years old. My uncle Bill had just died. He was a man who lived in another state who I had never met, yet even at a young age I could feel that something was off. Uncle Bill’s sickness was never quite described to me. “He got sick and died” was about the extent of the conversation. Only years later did I find out that he was gay and died from complications related to AIDS.

To this day, I still question why queer people were absent from the conversations of my parents. They seemed not to exist. The secrecy instilled a sense of shame both in myself and in the death of the man I never met. And yet when I came out of the closet seven years later, my parents claimed they knew all along.

When I started having sexual experiences of my own, I felt a unique paranoia about the men I had sex with. I absolutely, 100% had to use a condom. It wasn’t like this was a well-informed and responsible decision that I had come to on my own. I just knew I absolutely could not get HIV. It somehow didn’t matter that HIV is both preventable and treatable. HIV is shameful, the sex I have is disgusting and being gay is a curse. Period. This was the only way I had sex for many, many years.

Looking back on the words of my past sexual partner, I’m sure this is where his own fear stemmed from. Fear of HIV is often tied with a shaming of queer identity. For many years, having HIV and being a gay man went hand in hand as part of our society’s narrative of the disease and this is still a notion that we haven’t completely shaken. Thankfully, queer people in Seattle can now find support for the HIV virus from a variety of local non-profits.

In celebration of April as National Youth HIV/AIDS Awareness Month, HEYO (Health Education Youth Outreach), the youth program at Lifelong, is hosting an event called “A Future United: Youth Creating an AIDS-free Generation” (Saturday, April 18th, 1-3 PM, Seattle Central Library Auditorium, free admission). The event features a panel from local youth HIV activists who are working to de-stigmatize HIV by telling their own stories about being young and positive. Presentations will also be made on such topics as PrEP, the basics of harm reduction and the state of HIV prevention in 2015. Drag personality and artist Aleksa Manila will be hosting. Both as a young queer person and an intern for Lifelong’s HEYO youth program, I strongly encourage you to attend the event.

HIV is not a shameful disease. We thankfully live in a time when people with the virus are now fully capable of living a long and healthy life. But this doesn’t mean we shouldn’t take the proper precautions to protect ourselves. We now have the tools to create an AIDS-free generation. This could seriously be a reality. But we have to work together. Be open and honest with your sexual partners. Communicate with each other. Protect yourself, either with condoms or with the fabulous new advances provided to us through PrEP. And most importantly, do so because you choose to. Not because you have to.