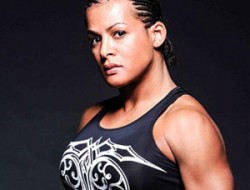 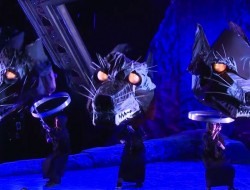 Marc Mazique, Clyde Petersen and Corey Brewer are ManDate, the multimedia band performing at the Translations Film Festival on Saturday, May 9, 2015.

Translations: The Seattle Transgender Film Festival opens tonight, May 7, celebrating its tenth anniversary. Its opening film, the west coast premiere of sports-themed “Game Face,” will feature a skyped Q&A with its documentary subject, Fallon Fox. The festival continues through Sunday, with a pinnacle performance Saturday, May 9, by animator/musician/filmmaker and local transgender luminary Clyde Petersen’s new band ManDate entitled “Oral History.”  This specialized multi-media experience is a one-time only show.

In the new millennium, art overage is rapidly becoming like news coverage, happening just as fast and becoming just as fleeting. From Seattle’s “Your [___] Neighborhood” art exhibit last week, where participants in visual, musical, and playwriting mediums worked together within a brief 21-day timeframe to make their contributions, the annual and self-explanatory 48 Hour Film Fest, and the general, now acceptable practice of local bands ignoring the once industry standard, 6-week “advance the show” rule by using the ease and speed of social media, it behooves the modern hungry arts lover to stay alert and connected. As Andy Warhol predicted, we’ll all have our 15 minutes of fame, but for artists like Clyde Petersen (a.k.a. Clyde O’Scope), who film festival goers will recognize from his animated contribution to Translations “Gender Failure” in 2013 and Seattle Lesbian & Gay Film Festival’s presentation of “Boating With Clyde” that year, his 15-minute increments keep coming one after the other, treading vaster waters and making bigger splashes.

In the case of his latest, Mandate’s “Oral History,” nothing Petersen and his fellow musicians and artists will perform or visually display will even be finalized until 72 hours before the actual performance. While the band members have had the technical computerized advantage of working remotely, putting all the pieces together in person is still vital. Catching up with Clyde after last night’s critical rehearsal at their Beacon Hill practice space, here’s what he had tell Seattle Gay Scene’s scenesters about what we can expect this Saturday night.

Seattle Gay Scene: How did your new project, ManDate, named after the legendary, off and on (1975–2009) gay magazine, come to be? Where did you meet your bandmates and what inspired you to create this particular incarnation?

Clyde Petersen: ManDate has been writing songs for the last few months. Marc Mazique, Corey Brewer and I have known each for many years from the music scene in Seattle. Before that, Corey and I lived in a house in Bellingham and were in several bands together. Marc and Corey met in the ‘90s at a wedding where Corey was performing a noise set and have collaborated a few times since. We came together with a shared interest in creating a certain kind of music, and started writing songs about the events of this year. Most of our songs focus on extremely depressing events and horrible trends in cultural oppression. Plus we’re pretty opinionated and fed up people, so that comes through in the songs. We have been writing songs about the state of affairs in the world: the murders of people of color and Trans people, the changing landscape of Seattle, queer safety, religion etc.

SGS: What is your working process like? Which comes first: lyrics, music, video? How do you correlate them?

CP: We co-write the music, work on lyrics, record a demo at practice and then cut films to the songs. Then we rehearse to the films.

SGS: In your career, have you experienced any prejudices or resistance from performance venues or even within the LGBT community?

CP: Everyone is going to have their own opinion about art. We can’t control what other people will think. We can just make the art and music we want to make and enjoy the process.

SGS: There’s definitely a revolutionary tone to the music and videos thus far. Do you feel like this decade for transgender people is akin to the 1970s for gay men and lesbians?

CP: This decade certainly is the era of Transgender people as the mainstream media’s pet or interest of the day. Transgender people throughout history have been outspoken advocates of civil rights and have often been found on the front lines of this fight for equality, either through choice or by nature of being inherently more visible in appearance than other groups in the Queer community.  I don’t think there can be another period like the 1970s ever again. The sexual liberation that fed the gay rights movement was crushed by HIV/AIDS and I don’t see how that kind of sexual liberation could ever happen again in that manner. I hope we are not entering a period of recreating a 1970s style revolution with a focus on Transgender people. That revolution was incredibly divisive and appeared to have left certain segments of the Queer community behind in the struggle, in order to recognize certain groups first, predominantly white, middle-class gay men and lesbians. I hope we are entering a period of change where we can fight alongside people of many identities to bring about some desperately needed cultural shifts.

SGS: While Saturday’s show is being billed as a “one time only performance,” you do intend for the band to continue on afterwards. Can you explain how your Translations show will be unique?

CP: The ManDate show at Translations is a one-hour film program, with assorted media, news, experimental and reality television clips. It will be accompanied by live music and we will have special guest Lori Goldston playing cello with us. Lori has soundtracked many live films and she shreds on the cello. The band will continue on, but “Oral History” is a special show we have curated specifically for this year’s Translations Film Festival.

SGS: The fusion of film, tech, and music together is a big reason why South By Southwest in Austin, Texas, is this hemisphere’s biggest, most cohesive entertainment industry festival. How do you feel about presenting your own such ambitious program? Where does that drive come from and where do want it to lead you?

CP: All the members of ManDate have been playing music and making art for many years, and mixing music and visuals. We all have experience in experimental performances. Marc plays in the marching band Movitas, Corey often uses reformatted disco ball objects with slide shows and projectors at his solo shows and I am an animator with big dreams of befriending John Waters. Actually, I’m pretty sure everyone in ManDate has big plans to befriend John Waters.