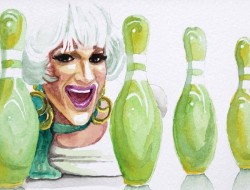 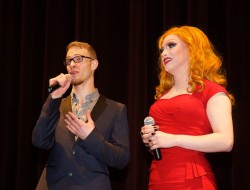 May 1, 2015 Comments Off on “Kurt Cobain: Montage of Heck” Is A Painful, Uncomfortable Triumph Views: 5132 Arts & Entertainment, Film, Music There’s a certain level of fame that once its reached, your ability to be a human being is taken away. You’re no longer a person on the same level of everyone else, but a new class of species that is somehow immune to error. Even your failures and inconsistencies are elevated. Sure, you put out a bad album or hacked your way through the scenes in a horrible movie, but you’re still a star. Despite having his own variety of weaknesses like anyone else, Kurt Cobain is definitely a figure who achieved such fame. We all know he struggled with a depression that eventually proved fatal, but the details of why aren’t just unknown, they appear not to exist at all. With director Brett Morgen’s new documentary Montage of Heck, these layers of worship and idolation are stripped in a way that has never quite been done before.

The film begins in somewhat traditional documentary-biopic fashion – we hear from his mother, his father, his childhood friend, all of whom provide a perspective into Cobain’s early life. Then unsightly details start to emerge. He’s a rambunctious kid, he’s medicated at an early age, he’s rebellious, he’s shuffled from house to house. As his stepmother claims, “his whole family rejects him.” These insights are only the beginning of a richly detailed and intensely uncomfortable re-creation of Cobain’s life. It’s not an extraordinary feat for someone to claim that a work inspired by a famous person is humanizing, but Morgen goes above and beyond. The film utilizes Cobain’s paintings, drawings, scribblings, lyrics, poetry, diaries and home videos, as well as press clippings, magazines, interviews, performances and audio recordings, all of which paint a portrait of a man who deeply struggled with mental illness and addiction throughout his short life. There’s the more traditional interviews with friends and band mates, but they are undoubtedly secondary and serve only to reinforce the primary footage. This is Cobain’s story, likely in the most thorough and objective form that will ever be available. The exhaustive research pays off, for Montage of Heck just may be among the most comprehensive and fully realized depictions of an important figure ever documented on film.

The film does not romanticize his fame, in fact it’s nearly ignored. His career and value as a musician is arguably circumstantial, for the story at hand is much larger. His crippling addiction and lifelong struggle with suicide smothers the film with an intensity that is often painful to watch. His diary entries prove especially chilling, with anger-infused rantings such as “I was so high the other day, I picked at my skin until it bled.” On one page, the words “Kill yourself” appear over and over. On the reverse, we see a man who was incredibly skilled and committed to his work. The passionately written schedules, careful planning of demo tapes and continually re-drafted scrawlings of lyrics provide quite the contrast to a man who hated himself despite his brilliance.

Montage of Heck is a complex and impeccably well-crafted piece of work. The film not only honors the life of Kurt Cobain, but suggests a shared sympathy with all of those who struggle with mental illness. Morgen creates an unflinching and violent look into Cobain’s life with such effectiveness that at times it feels like we’re experiencing the film straight from the musician himself. To create such an effect alone is an absolute triumph, to do so with such sincerity and integrity is a stroke of genius.

Kurt Cobain: Montage of Heck will screen at The Egyptian on Capitol Hill through Sunday, May 3rd before debuting on HBO on May 4th.