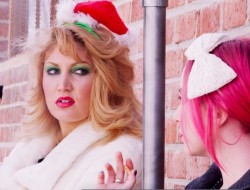 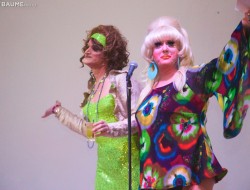 Some Lovely Photos (And Catty Comments) From The Mark... Yes, it’s time for the event we’ve ALL been waiting for….The Roast of “Beloved” Capitol Hill Geriatric Drag Diva/Hookah With a Heart of Lead, MARK FINLEY! (And, probably your last chance….beotch ain’t gettin’ any younger….)

It’s going down Thursday, May 7, 2015 at Fred Wildlife Refuge starting at 7pm (Doors/Dancing/Schmoozing) followed by the big show at 8pm featuring Mark’s OOOOOOOOOOLD friend, the Divine (Barely Living) Legend, Lady Bunny as the evening’s hostess/chief roaster plus a line-up of local stars including some old pals/frenemies/hasbeens/never weres like:

PLUS, some VERY special SURPRISES! (telegrams from dead celebrities!!!)

Who does this show benefit?

Proceeds benefit The Ginny B (http://theginnyb.org/), an arts laboratory, based in Seattle, that solves the problem of the solitary struggle of the artist.

Who are the folks putting this on?

“Capitol Hill Roasts” is a new producing group that plans on putting on MORE roasts in the future….stay tuned!

Can Children come to this event?

NO! Since Ms Finley feeds on the blood of the young, no one under the age of 21 will be admitted.

How hot will this Roast be?

Mark is quite elderly….held together by the stringiest of sinew, bone dust, and cheap poly-blends from Jo-Ann Fabric. We think a gentle even heat of about 250 degrees should burn away most of the poison and black mildew.

How nasty is Mark Finley?

Mark Finley is soooooooo nasty, that he’ll eat out your cat’s litter box before manning the Kissing Booth at the “Sick Kids with Awful Diseases” booth at the County Orphanage fundraiser.

Where can I buy tickets to this night of depravity and bashing of the elderly and the infirm?