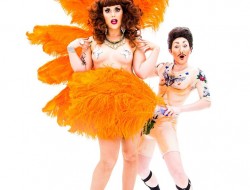 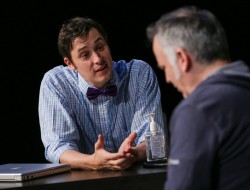 Mr. Schmader Signs Off “Last Days” And Jumps To A “Short Term Solution” It’s done. Stick a fork in it. Seattle’s beloved alt weekly rag, The Stranger, is falling off its bone and ready for its final meal.

David Schmader signed off on his final “Last Days” column at The Stranger today after 16 years of slogging away at the once popular feature which highlighted the meaningful and the mundane from the previous week of daily events…and, frequently featured gory and gross tales of dumb/neglectful/nasty parents who ate/beat/raped or forced their kids to have bad haircuts to appease their Sky God. It (the column) and the writer (Mr. Schmader) will be missed from The Stranger’s pages.

Even though Mr. Schmader and I had a NASTY fight once on SLOG, The Stranger’s once awesome/now dull blog, over a discussion about a photo shoot on a long ago cycle of “America’s Next Top Model” which featured the contestants posed as the victims in violent crime death scenes. I thought the shoot was one of their more clever/artistically successful ones but David was appalled by what he thought was extremely poor taste and started clutching his metaphorical pearls in horror and letting me know what a monster I was. I got snarky and defensive (yes, I haven’t changed much) about this and pointed out he (Mr. Schmader) frequently wrote about parents who accidentally microwaved their infants and how did that make HIM the arbitrator of “good” taste, and it all went downhill from and we eventually called each other nasty sluts and slapped each other, then cried.

A toast to Mr. Schmader and the demise of “Last Days”!!

But, do not cry for Mr. Schmader…by leaving The Lusitania known as The Stranger, he joins an illustrious club of fellow expatriates who have also recently fled/been gently shoved off the Lido Deck and he can now focus on his awesome new job as the head of some oddly named arty farty writerly group, as well as his freelance writing which includes the publication of his upcoming book Weed: The User’s Guide, published by Sasquatch Books which debuts next spring and should be really amazing since Mr. Schmader has been doing LOTS of research on the subject for many, many decades.

You can also find him continuing his solo show performance career and even check him out this upcoming Saturday, September 19, 2015 at Hugo House for a one night only appearance in “A Short-Term Solution to a Long-Term Problem” which is…

A comedy about unfunny things, “A Short-Term Solution to a Long-Term Problem,” is writer/performer David Schmader’s solo play about the dramatic life upheaval that drove him to spend a decade “living every day like it’s your last!”—a profoundly ridiculous adventure that finds Schmader aiming his pointy-headed, fall-off-your-seat wit at marriage, Mormons and the type of relaxation that comes from watching a baby get a spray tan.

You are strongly encouraged to “Check it Out”.

Even though he was TOTALLY off base over that long ago “America’s Next Top Model” photo shoot…which was AWESOME!